A young teenage boy who was tortured by his stepmother and a herbalist over accusations of witchcraft has told his story. 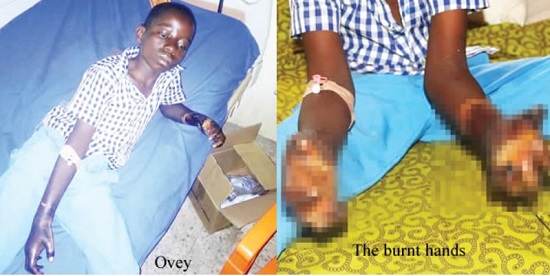 A 13-year-old boy, Ovey Friday, whose hands were allegedly burnt by an herbalist on the prompting of his stepmother in Nasarawa State, has narrated how he ended up in hospital.

Speaking in an interview with Northern City News on his hospital bed at the Dalhatu Araf Specialist Hospital, Lafia, on Thursday, the victim said his troubles began when his stepmother, Mrs Mercy Jummai, 35, who is heavily pregnant, accused him of being a wizard.

According to him, Mercy, whom he lives with in the Wulko community in the Nasarawa-Eggon Local Government Area of the state, raised the alarm that he made love to her in her dream.

He said, “My stepmother said she was always seeing me making love to her in her dream, but I told her that it was not true.

“So, she started threatening me, saying that I would not stay in the same house with her. That was when she said she would take me to a native doctor’s house.

“The native doctor, who is a Fulani man, picked a stone and threw it at me. After that, he rubbed the stone on me and tied my two hands with a rope.

“Then, he brought charcoals out of the fire and poured it on me and tied my hands, asking me to confess that I was a wizard and a member of a secret society. But I told him that I was innocent of what he was accusing me of.

“He brought out powdered pepper and poured it into the fire while the smoke smeared all over my face, with my hands burning.

“After that, he fetched charcoals from fire (he did this three times), that was when I began to pray to God. When he saw that I was praying, he came back and untied the rope from my hands, but my wrists, palms and fingers were already badly burnt.

“They brought me home and the next day, I woke up to see that both my hands had swollen. It was at that time that they took me to hospital for treatment.”

Ovey, who is fondly called ‘Small Man’ by members of the Wulko community, said, “I have forgiven my tormentors.”

Residents of the community described the teenager as an assuming boy, who is a member of the St. Mary’s Catholic Church choir and a class captain at the Government Junior Secondary School in the community.

When our correspondent visited the Wulko Police Outpost, the officer in-charge, Danjuma Bujujin, said the police were working to ensure that those behind the crime against the boy were brought to justice.

It was gathered that the case file had been transferred to the Nasarawa-Eggon Divisional Police headquarters for further investigation.

It was learnt that the suspects were initially detained for one night.

Speaking on the issue, the paramount ruler of the area and Sarkin Garin Wulko, Joseph Envuladu, expressed displeasure over the incident, which he said was uncommon in the community.

He stressed the need for the police to diligently investigate the matter and bring all the culprits to book.

Our correspondent was informed that the damage done to the victim had led to the permanent loss of the use of three fingers on one of his hands.

Medical personnel at the hospital, who spoke on condition of anonymity because they were not authorised to speak to the media, expressed fears that if further treatment was not commenced immediately, the hospital might be forced to amputate Ovey’s hands.