There had been a heated debate in recent time regarding the abduction of some children from northern Nigeria to the South-East. 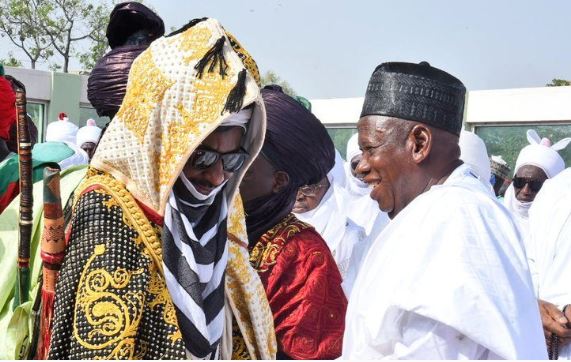 The Director General, Media and Communications, Kano State Government, Salihu Yakasai, is under fire for insulting the Emir of Kano, Muhammad Sanusi II, on Twitter.
Yakasai, who tweeted through his handle, @Dawisu, on Sunday, asked the emir to “stop opening his filthy mouth” for making a comment over the abduction of some children from Kano State.
There had been a heated debate in recent time regarding the abduction of some children from northern Nigeria to the South-East where they were given Igbo names and converted to Christianity.
Reacting to the incident, Sanusi on Saturday said Igbo should not be attacked.
He blamed the parents for the incident, insisting that many northern parents had the bad habit of allowing their children roam the streets to beg thereby making them vulnerable to kidnap.
In his response, however, Ganduje’s aide said, “A very reckless comment to make. I wonder if any of his relatives get kidnapped or stolen, he will act the same way. The kids are not almajiris for goodness sake. SLS (Sanusi Lamido Sanusi) should have kept quiet instead of opening his filthy mouth to make such insensitive remarks. Nonsense!”
However, Dawisu and Emir have since been trending on Twitter over the matter, generating over 10,000 tweets as of 2pm on Sunday.
But many Twitter users cautioned Dawisu for insulting the monarch.
Adamu Sarki Aliyu tweeted, “Our royal highness is on track. What he said is good. Don’t politicise his statement.”
Lamido tweeted, “Dawisu has lost it a long time ago. I don’t know why he chose to be bitter with Muhammad Sanusi.”
Also reacting, @AYZarewa said, “Dawisu has been ranting all over Twitter about SLS’ words, where are his children at 10pm? Does he leave them roaming the streets? Go to Yakasai by 10.30pm, you’ll see the meaning of negligence. This contributes to the child trafficking and rape, like it or not.”
But Mohd Saleh faulted the emir for blaming the parents, saying, “No, SLS, you cannot blame the victim. This is tantamount to blaming a rape victim for indecent dressing.”
Ganduje’s aide is not new to controversy.
In February, during the presidential election, he blamed the South-West for not delivering enough votes for President Muhammadu Buhari, insisting that it was a shame given the number of political appointments the geopolitical had got under Buhari
In September, he described Vice-President Yemi Osinbajo as the ‘Vice-President Academics,’ a derogatory term used by critics of the President to describe Osinbajo.
Ganduje had in April broken the Kano emirate into five, an apparent attempt to whittle down the power of Sanusi.
Sanusi, who is a former governor of the Central Bank of Nigeria, has been berated by a section of the conservative North for his progressive views.
Source: Punch
Top Stories