The legislators, who are mostly members of the Peoples Democratic Party, said the rich should be taxed more. 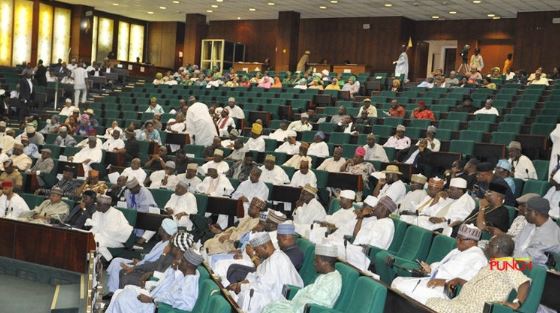 The House of Representatives has criticised the plans by the Federal Government to increase the Value Added Tax from 5 per cent to 7 .5 per cent as being proposed in the Finance Act (Amendment) Bill .

The bill is scheduled for the second reading at the House this week .

According to the lawmakers , who spoke to a Punch correspondent in separate interviews, the proposed increase will create more problems for he masses .

The legislators, who are mostly members of the Peoples Democratic Party, said the rich should be taxed more.

President Muhammadu Buhari had , after laying the 2020 Appropriation Bill before the National Assembly , sent the bill to both the Senate and the House to approve the increment through the amendment.

The bill narrowly passed second reading at the Senate , with some of the senators vowing to mobilise stakeholders against it during public hearing .

The Deputy Chairman , House Committee on Commerce , Mr Richard Gbande, warned that the increment could harm small and medium scale enterprises and make life more difficult for the poor .

The lawmaker, who is representing Katsina Ala / Logo / Ukum Federal Constituency of Benue State , said, “ We will always go with the masses. Our most important decision will be to see that we reduce the suffering of the masses . We don ’t even need a soothsayer to tell us that our people are suffering. There is hunger and starvation in the land .

“ We will be very objective and if the decision will cause more harm than good , then, we will advise them to put it on hold for now until a time when the people are happy and the economy has actually improved. ”

Another member , Mr Bamidele Salam , said he would support the increment only if it would be limited to luxury items. He said, “ Consumption tax is a very good means of generating revenue for any country , but it has to be on luxury items. Those who want to drink Champagne or Brandy and other luxury items should pay nine per cent or more .”

The lawmaker added , “The other issue has to do with the distribution of ( revenue from ) VAT; that is where I am actually concerned . VAT is a consumption tax and I think 80 per cent of VAT ( revenue ) should be domiciled in its place of origin . The present system , to me , is unjust ; where you take VAT to a central pool and then use one nebulous formula to share it . It is unjust.

“ It is a consumption tax and 80 per cent of it should be domiciled in the place of consumption and 20 per cent should be remitted to the federal purse to be shared. The 80 per cent should remain in their state of origin so that those who want to take beer and pay VAT on it should use the proceeds to develop their states. Those who have banned beer , cigarette and every other things should not benefit from the proceeds of VAT. ”

Also, the Deputy Minority Leader , Mr Toby Okechukwu , said, “ Bringing the Appropriation Bill before submitting the bill on VAT is like putting the cart before the horse. The bill should have been brought earlier so that it could constructively be part of the budget. If the National Assembly refuses it , it means that the cash flow expectations of the government will not be in place .

According to Okechukwu , while Nigerians pay less VAT when compared with other countries , they should enjoy more security and infrastructure if they are to pay more tax .

He stated , “ The issue is that, is it ( VAT) in tandem with the quality of expenditure?”

Another PDP lawmaker, Mr Nicholas Ossai, said , “ I think the arguments ( debate) will come up this week . The first reading was on Thursday . I expect that by Wednesday or Thursday , the second reading should have been done. ”

Ossai added , “ VAT increment on air transport and electricity should be removed because they are not luxury goods ; they are goods that affect the common people and the common people are overtaxed. Secondly , you cannot increase workers ’ salaries and remove it through the backdoor .