Did Osinbajo Pray For Buhari's Death In Church? Check Out What His Spokesman Has To Say


Vice President, Yemi Osinbajo has reacted to claims that he prayed for Muhammadu Buhari's death. 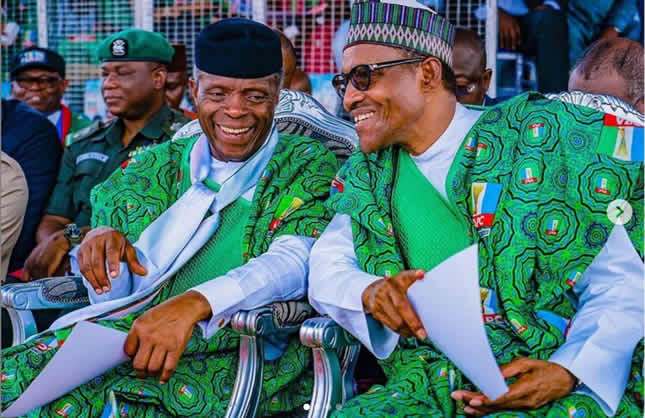 According to Punch Metro, Vice-President Yemi Osinbajo’s spokesman, Mr. Laolu Akande, has denied allegations that his principal visited a parish of the Redeemed Christian Church of God where he and other congregants allegedly prayed for the death of President Muhammadu Buhari.

Akande, who is the Senior Special Assistant to the President on Media and Publicity (Office of the Vice-President), said this in an article published in reaction to columnist, Dr. Festus Adedayo’s opinion piece.

Adedayo had, in an article published on Sunday in several online platforms (not The PUNCH) titled, ‘The Trials of Brother Osinbajo,’ said he received information that Osinbajo, who is a Senior Pastor with the RCCG, had, in a gathering with members of the church, prayed for the death of the President when the latter was away on medical leave.

The columnist said a confidante of Buhari, who was at the gathering, informed the President of Osinbajo’s “sinister plan,” hence the breakdown in the relationship between Buhari and Osinbajo.

In his reaction, however, Osinbajo’s spokesman challenged Adedayo to state where the alleged prayer session took place and the date.

Akande wrote, “He (Adedayo) claimed that the Vice President, together with some Redeemed Church ‘accomplices,’ gathered to pray at some place unstated in his home state of Ogun, at a date that was not indicated, for the purpose of interceding for the VP to become President, and by extension, hoping for, or seeking the death of the President.

“So, where exactly in Ogun State did this prayer session take place, and when? Was it in a church, in which case there would likely be an audio recording?

“Who are the prominent pastors or other persons involved that can testify to what transpired — what are their names?

“Who is the ‘strong Buhari ally’ who made a surprise appearance at the gathering and brought the story back to Mr. President?

“If, as Adedayo claims, the VP has been hounding and haranguing this Buhari ally since then, why is it so difficult for him to cry out and publicise his strange discovery?”

Akande also rubbished claims by Adedayo that Osinbajo, as acting President, had an ulterior motive when he sent the name of the then acting Chief Justice of Nigeria, Justice Walter Onnoghen, to the Senate for confirmation.

He wondered how Osinbajo would have wanted Onnoghen to sack Buhari.

“Who primed Onnoghen to package Buhari inside a judicial casket during the 2019 elections? And to whose benefit?

“If, for any reason, the Buhari election was nullified by the judiciary, how would that benefit his running mate, since they contested on the same ticket?” Akande asked.

The Vice-President’s spokesman said it was unfortunate that some elements were being sponsored to drive a wedge between Osinbajo and Buhari.

There have been reports about a friction between the President and the Vice-President in the last three months.

So far, the President had reduced the responsibilities of his deputy and had also sacked 35 of his aides.