Recall that the Birnin Gwari-Kaduna highway has come under constant attacks from suspected bandits, who terrorise motorists plying the road. 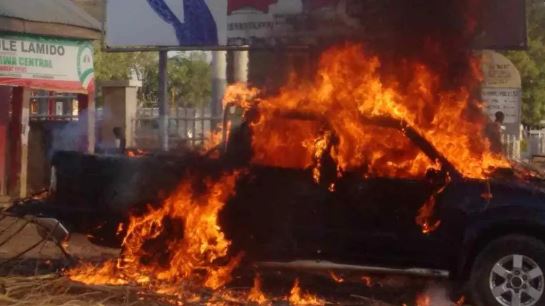 Suspected bandits ‎have attacked a police vehicle and set it ablaze in Kaduna.

A source who do not want his identity revealed said the incident occurred around 11pm after a gun duel between the suspected bandits and the police as they were on their way to Kaduna from Birnin Gwari.

Recall that the Birnin Gwari-Kaduna highway has come under constant attacks from suspected bandits, who terrorise motorists plying the road.

A source among the vigilantes working on the routes told our reporter that a policeman was injured during the attack, while some ran into the forest.

“They (police) were travelling in the white escort ‎van at a place called Kwaru after Kwanar Labi close to Udawa town when they came under attack. The bandits were in large number. One policeman sustained injuries while the rest escaped into the bush.

“No life was lost in the attack but the van was set ablaze by the bandits,” he said.

A Birnin Gwari resident, who did not want his name mentioned, told our reporter that the van was completely burnt.

“I saw when the car was burning because I was travelling on the same day too but we couldn’t stop because the area where the incident happened is considered danger zone,” he said.

When contacted, the acting Public Relations Officer of the State Police Command, ASP Sulaiman Abubakar, said he would get the details and get back to our reporter but was yet to do so as of the time of filing this report.