An Illegal hospital operated by a Ghanaian in Mafoluku area of Lagos State has been discoverd by the Police. 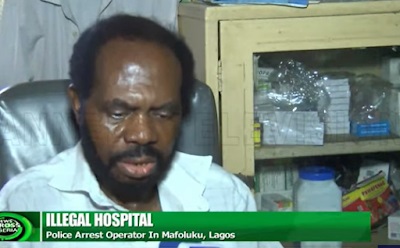 The Police have discovered an illegal hospital operated by a Ghanaian in Mafoluku area of Lagos State.

The man who claimed he came into Nigeria as a nursing tutor in 1982, established the hospital 14 years after.

Upon interrogation, the consultant and operator Hayfore Adu – Peprah, who says he is suffering from hypertension, diabetes and kidney disease could not provide the certificate he claimed to have obtained before operating the private home.

A family member of a victim who lost her baby in this hospital narrates his ordeal, he explained that in September his relative came to the nursing home due to swollen legs, she met one of the nurses on ground as the doctor was not available.

“The nurse asked her to go for another scan which she did when she came back one of the nurses directed her to go to a general hospital when she got there she spent two days there before they transferred her to Ayinke House Ikeja.

“Two weeks later I came back here to ask the doctor what happened, he said that he knew the baby (of his relative) had died in her womb for 2 weeks but didn’t know how to tell her”.

The operator, however, denied his alleged title as a medical doctor for the nursing home.