The Anglican Bishop of Zaria has declared the Governor of Kaduna State, Nasir el-Rufai will never become Nigeria's president. 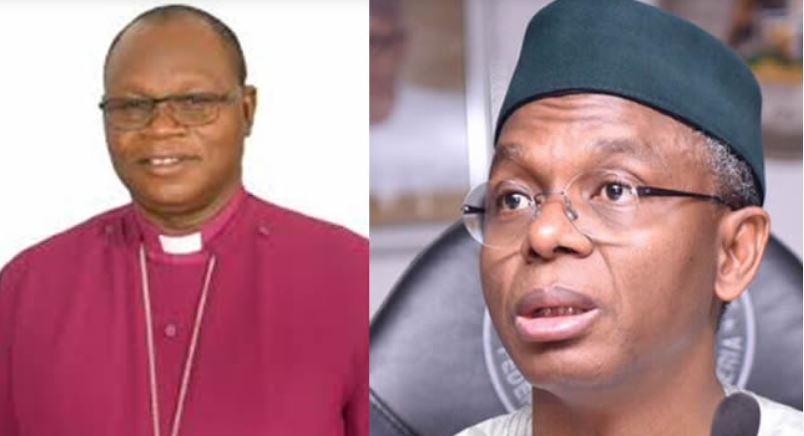 Bishop of Zaria Diocese (Anglican Communion), Rt Rev Abiodun Ogunyemi and Governor El Rufai
The Bishop of Zaria Diocese (Anglican Communion), Rt Rev Abiodun Ogunyemi, has said that the Governor of Kaduna State, Nasir el-Rufai, will never be president of Nigeria, according to Punch.
Ogunyemi says he believes that the governor is being prepared to contest in 2023.
The bishop, in what seems to be an angry post on the website of the diocese, spoke in reaction to the now-rested planned demolition of 110-year-old St George Cathedral, Sabon-Gari Zaria; and another alleged plan to demolish the Sabongari property of the Church.
Ogunyemi, in the blog, condemned the Bishop for Wusasa Diocese, Anglican Province of Kaduna, Rev. Ali Buba Lamido, who had, on Monday, commended el-Rufai for his decision to halt the aged church building’s demolition.
Ogunyemi warned that any attempt to frustrate the Church in Kaduna State is an affront to God and to the Christians all over the country.
While stating that the “Diocese of Zaria is not at war with the governor and we are not religious bigots. We are only fighting for our right. Nobody can stop us from fighting for our right;” he noted that Bible prophets did not apologise to kings, but rather, kings apologised to prophets.
In what appears to be the reason for his anger, Ogunyemi said the Church will not keep quiet while proposals are ongoing to demolish “our Cathedral.”
He said, “A letter was written by KASUPDA on the orders of the governor to us to quit the Cathedral premises within seven days, and we responded in the best possible ways together with CAN and other Christian organisations all over the world.
“Rather than apologising to the governor, the governor should apologise to the Church and the general public for embarrassing himself with the quit notice.”
Continuing, Ogunyemi said, “The governor should stop embarrassing himself with demolition of churches in any part of Kaduna State.
“Any attempt to demolish our shops or our properties in Sabongari market is evil, callous and wicked and will be associated with the wrath of God.
“The whole of the Sabongari market is our land acquired in the early 1900s with genuine C of O, which we have submitted to the state government for re-certification.
“Any attempt by el-Rufai to demolish any of our properties in that market will be a direct assault on the Church in the whole of Nigeria.
“The governor is being prepared for 2023 elections. The governor should know that he will never be president of Nigeria. I speak prophetically as a servant of the living God.
“Let fake Christians and religious spies placed in our Church by a particular religion be aware of the consequences of their actions because heaven is watching.
“May the Lord expose these spies in our midst in Jesus Name.
“In fact, their actions now show very clearly that they are working for an interest against the Church.
“The Lord in His mercies will raise help to deliver His Church from fake Christians, fake converts and novices.”
Top Stories