A couple who wanted to keep a strict vegetarian diet with their son has been charged for his death. 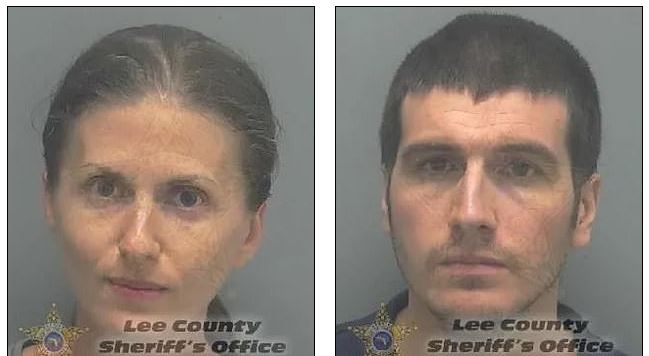 Sheila O’Leary, 35 (left), and Ryan O'Leary, 30 (right), from Florida, have been charged with aggravated
manslaughter due to neglect and child neglect in the starvation death of their 18-month-old son in late September
A vegan couple from Florida who have been feeding their four young children a strict diet of raw vegetables and fruit have been arrested on manslaughter and child neglect charges for allegedly starving their 18-month-old son to death.
Sheila O’Leary, 35, and Ryan O'Leary, 30, were arrested last week in the death of their youngest child who had the weight of an average seven-month-old infant.
According to a press release from the Cape Coral Police Department, on September 27, officers responded to a report of an 18-monh-old who had stopped breathing at his family home. Paramedics who were summoned pronounced the toddler dead at the scene.
The boy weighed just 17lbs at the time of his death. An autopsy later found that the toddler succumbed to conditions associated with starvation, including dehydration, a liver disorder and swelling of the hands and feet, reported The News-Press.
Detectives with Major Crimes Unites arrived to find the deceased boy and two of his older siblings, ages three and five, appearing extremely malnourished and small for their age.
A probable cause affidavit stated that both children were pale and had yellowish skin, and one of them had blackened teeth caused by dental decay.
A third child, aged 11, was also present at the scene but appeared healthier than her younger siblings.
Documents reveal that the 11-year-old, who is Sheila O’Leary’s daughter from a previous relationship, visits her biological father in Virginia every two months, which could explain her better physical shape, compared to her emaciated half-siblings.
When interviewed by police, the mother-of-four said her youngest child had not eaten anything other than breast milk in the week leading up to his death. She said she thought he did not have appetite because he was teething,
On the morning of his death, the 18-month-old began to experience breathing problems after nursing for a minute. His mother conceded to police that she should have sought medical help for him, but instead she and her husband fell asleep.
Sheila revealed that the boy was delivered at home and had never seen a doctor, according to the probable cause affidavit.
The O'Learys' children were all fed a diet mainly consisting of mangoes, bananas, avocados and rambutans, and were home-schooled by their mother.
The couple’s two surviving biological children were removed from the home and placed in the custody of Child Services after their brother’s death, while their older half-sister was sent to live with her father in Virginia.
The state attorney’s office said that Sheila had a prior case out of Virginia, after her eldest daughter had been placed in state custody for failure to thrive and severe malnutrition.
The parents turned themselves in to police after their son's cause of death was revealed on November 6.
Both Sheila and Ryan O’Leary were charged with one count of aggravated manslaughter of a child due to neglect, one count of child neglect causing great bodily harm, and one count of child neglect without great bodily harm.
During their initial court appearances, Sheila's defense lawyer argued that her 18-month-old son had been sick for six months prior to his death, reported Fox 4 Now.
Attorney John Musca pushed back against claims that the couple's children were malnourished, arguing that they were naturally small from birth but 'perfectly healthy.'
The parents are being held in Lee County Jail on $250,000 bond each pending their arraignments set for December 9.
Culled from Dailymail.
Top Stories