Why I Picked Nigeria Over Germany - Super Eagles Goalkeeper, Okoye


Okoye who made his debut for Nigeria in a friendly match against Brazil has opened up on why he choose Nigeria over Germany. 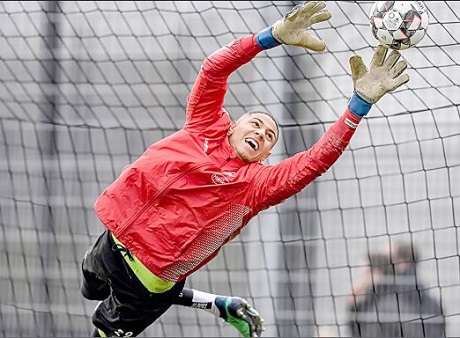 Super Eagles and Fortuna Düsseldorf goalkeeper, Maduka Okoye, said his love for Nigeria influenced his decision to pledge his international allegiance to the country ahead of Germany, insisting it was the right choice he made.

Saturday Punch broke the news in July that Gernot Rohr was looking at inviting the 20-year-old to the national team but his job was made easier when the former Bayern Leverkusen goalkeeper expressed his desire to represent Nigeria ahead of his country of birth.

Okoye would go on to make his debut for Nigeria in a friendly match against Brazil in October after he was brought on for the injured Francis Uzoho in the 63rd minutes and the youngster has said it was a dream come true making his debut in a game of such magnitude.

‘’It is a dream come true wearing the green and white colors,. I’ve always wanted to wear it, it is a pleasure and I’m so honoured to play for this country, especially making my debut against such a big country like Brazil.

‘’I am just looking forward to getting better and having more caps for my country.’’

The one-cap goalkeeper also talked on the difference in training in Nigeria and Germany.

‘’It is different from German football. Of course in Germany we do in pre-season hard work.

‘’Here with the Super Eagles it’s everyday hard work no matter how the weather is or something else.

‘’It is really hard with these conditions, like 32 degrees, but I get used to it and it is getting better day by day.’’

Okoye will be hoping to increase his number of caps when Nigeria face Lesotho in the second qualifier of the 2021 Africa Cup of Nations on Sunday.