Army Troops Rescue Octogenarian, Others From Boko Haram In Borno


The rescued victims were evacuated while the children among them were equally administered with Polio Vaccination by a Nigerian Army medical team. 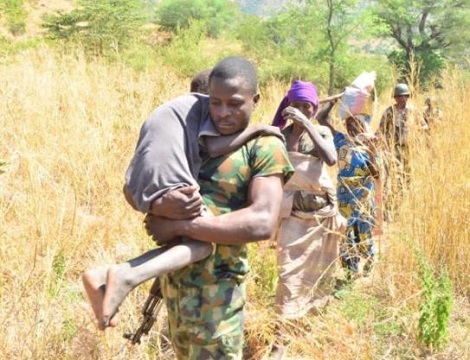 The Nigerian Army Operations Media Coordinator, Col. Aminu Iliyasu, disclosed this in a statement on Sunday in Abuja.

Iliyasu said that the rescued victims were evacuated while the children among them were equally administered with Polio Vaccination by a Nigerian Army medical team.

He added that no causality was recorded by the army troops during the commando operations.

According to him, many of the Boko Haram criminal elements fled in disarray towards the summit of Mandara Mountains with gunshot wounds.

“The troops’ resilience and doggedness are unwavering as further exploitation to complete the annihilation of the insurgents is being sustained in the mountainous environment.

“The Chief of Army Staff (COAS), Lt.-Gen. Tukur Buratai, wishes to reassure the public of the resolve of the Nigerian Army to continue to execute our constitutional mandate professionally and responsively for a better secured Nigeria.

“He also thanks all well-meaning Nigerians for their continued support, goodwill and understanding towards officers and men of the Nigerian Army as they sustain the conduct of various operations and routine exercises nationwide,” he said.

Iliyasu said that the army troops had continued to sustain the tempo of the counter-insurgency operations in the North East with a view to decimating and destroying the remnant of Boko Haram/Islamic State West Africa (ISWAP) criminals.

He said the troops had also continued to extract credible intelligence report on the presence of some of the criminal insurgents in the areas. (NAN)