Due to a land dispute in Calabar between the village head and Ekpe Okon Effiom family, the corpses of a couple have been abandoned out in the open for days. 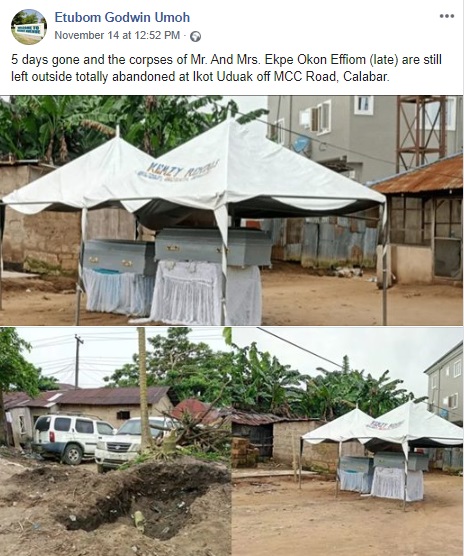 Corpse of the Deceased Parents

The corpses of a couple were abandoned out in the open for days due to a lingering land dispute in Calabar, Cross River State.

According to Facebook user, Etubom Godwin Umoh, who shared photos of the corpses, the children of the deceased brought out the body of their parents from the mortuary on November 8 to bury them on the land they say their grandfather bought. But the village head stopped them.

According to Etubom, the village head allegedly claimed the dead couple and other family members are not from that village, therefore, they cannot be buried there. It is also claimed that she wants to sell the land, even without support from villagers, and she has even gone ahead to sell a portion of it on which a pharmacy was built.

The son of the deceased couple, Bassey Okon Edet, said: "That is my Father and Mother’s corpses and the compound is where my grandfather bought and later transferred to my father, Ekpe Okon Effiom. We have the agreement and documents of the land.

"The Village Head, Efio-Awan Asibong, that lives close to our compound wanted to sell our land. My father lived there and gave birth to 11 children (10 male and one female) and we’d lived here for many years and also given birth to children.

"When my father died, all of a sudden, Asibong said she wants to take over the compound and she’d sold part of the land to someone who had already built a pharmacy. Now, we wanted to bury my parents, the woman (Asibong) said we shouldn’t bury them, stating that we are not from here.

"We sought help from the community leaders and the Police who said we have to bury my parents in that compound, but the Village Head insisted that we can’t bury our parents because they are not from here. She said her mother gave my father the land for free, but it was a lie because the document that my father bought the land is there. The land document was wrote and signed in 1954."

Telling her side of the story, the Village Head Etubom: "One of the deceased sons came to me and I showed him a place (their family compound across the road) to bury his mother and father and he agreed, but his family rejected it and he didn’t come back to tell me, instead they came with the Police, shooting everywhere and insisting they must bury their parents as they started digging their graves.

"I earlier brought people to help dig the graves for them where I originally showed them, but when they started digging the grave, one of them, Clement Ene, went and drove the boys digging the graves away and said he gave me N60,000. I later called him and returned the N60,000 back to him and told him to carry the corpses to either Goldie Cemetery to bury them there, but they refused.

"They are my tenants, I gave them a letter over 6 months ago to go to Calabar Municipality Council to show that we have agreed to bury someone here. After they collected the N60,000 they gave to me, they agreed to carry the corpses to bury elsewhere, but they turned around and left them there  since Saturday.

"They don’t have any documents concerning this land. If they agree that they bought the land, then ask them to show you the agreement and the person that signed it. There’s an agreement between us and everyone we give land here, but where is theirs? If they’d insisted in burying their father and mother, they could have exhumed them. We would’ve gone to the court". 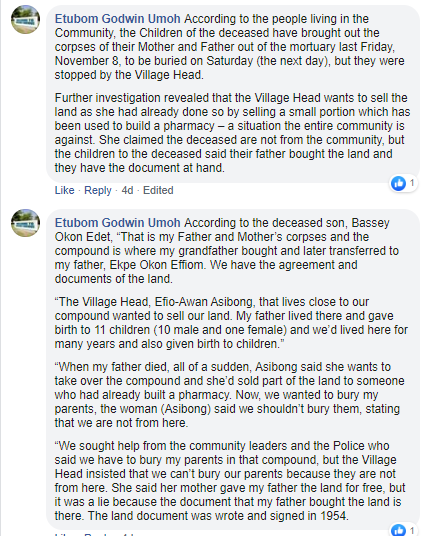