Popular OAP, Daddy Freeze has reacted after actor, Yul Edochie says he has a pastoral calling. 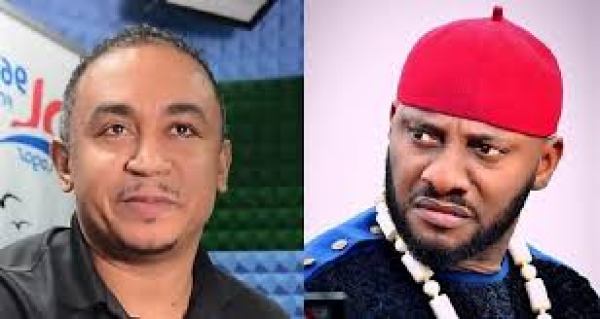 Daddy Freeze, a controversial on-air personality, has rubbished claim by Nollywood actor, Yul Edochie that he has calling from God to be a pastor.

Edochie had said in a tweet that he was nursing the ambition of becoming a pastor.

Edochie, who earlier this year survived a motor accident that could have claimed his life, said he had become born again and would serve God.

However, Edochie, in a tweet said so many things had been happening in recent time that left him in awe, saying that he had a calling to serve God.

“Back home in Lagos. After my acting seminar yesterday, resting, recharging for more movements coming up.

“So much is happening recently that has left me in awe. In deed, I have a calling to serve God. A pastoral calling,” he tweeted.

But Daddy Freeze did not think Edochie had a calling from God, but suggested that such calling might be from Satan.

“I am hoping this your ‘calling’ is on God’s call log sha. Great way to showcase your ‘manifestations’ by telling people to disobey what Christ said in Matthew 5:44 and follow their emotions instead, like you recently suggested on twitter.

“Looks like a missed call in my humble opinion, don’t take it too seriously,” he said on his Instagram page.

Daddy Freeze added: “Are you even sure it was the LORD of heaven’s armies that called you, not the god of this world, Satan, as seen in 2 Corinthians 4:4? Because, for all you know, there could have been a gathering of the heavenly court as seen in Job chapters 1 and 2, where Satan had access to God’s phone and maybe called you?”