Drama As Man Gets Caught With N2.5m Fake Notes By Customs (Photo)


A man has been caught with a whopping N2.5 million fake notes by men of the Nigeria Customs Service. 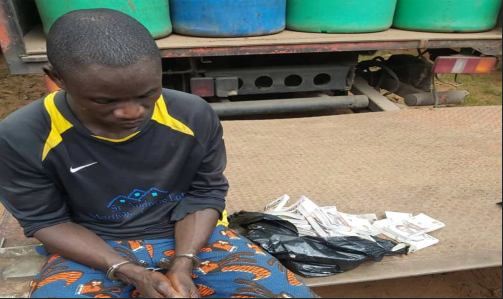 The man was caught with fake notes

According to a report by Punch Metro, the Ogun State Command 1 of the Nigeria Customs Service says it has intercepted a man in possession of N2.5m fake currency notes at Ihunbo, along the Sango-Ota-Idiroko border.

The Controller of the command, Mr Michael Agbara, said other seizures made during anti-smuggling activities included 147 kegs of Premium Motor Spirit, also known as petrol, and 40 drums of industrial alcohol, otherwise known as ethanol.

He said the suspect caught with the fake naira notes, Samson Odebija, told the operatives that he was recruited by one Islamic cleric to help convey the notes to Owode from Idiroko.

He added that the suspect said the cleric promised to reward him with N5,000 if he successfully conveyed the currency to Owode.

Speaking on the ethanol seizure, Agbara stated that the product was categorised by the National Agency for Food and Drug Administration and Control as strictly “for industrial use.”

He said, “The item (ethanol) was strictly stamped by NAFDAC for industrial use.

“However, investigation revealed that some unscrupulous elements engage in the distribution of the product to residents of Idiroko, who ignorantly dilute it with water and take it as an alcoholic drink. This is evidently harmful to the health of the people.”

Concerning the PMS, the Customs controller said the command’s anti-bunkering Team ‘A’, while on patrol, discovered a smuggling hideout at Iko-gate along the Idiroko Road and seized 160 jerry cans of 25 litres each filled with petrol.

He said the smugglers had devised a crooked method of hiding a petrol tanker, using other vehicles to shield it from the public view.

Agbara added that the smugglers passed a pipe to the tanker, which they connected to a tank hidden in a cassava farm, from where the content was later transferred to jerry cans.

“The smugglers had the intention of smuggling the petroleum product in batches to neighbouring countries,” he noted.

The Customs controller appealed to members of the public to embrace legitimate means of livelihood and avoid smuggling in all its ramifications.

“Our eagle eyes are all over Ogun State to halt the new techniques adopted or that will be adopted by smugglers to perpetrate their illicit acts,” he said.