The body of a Unidentified middle-aged man was found floating on a river in Ojoto community in Idenmili South Local Government Area of Anambra State. 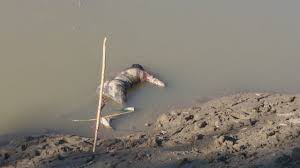 The body of a middle-aged man whose identity is yet to be ascertained was found floating on a river in Ojoto community in Idenmili South Local Government Area of Anambra State.

A police patrol team attached to Ojoto Division, acting on a tipoff, stormed the river known by the villagers as Mmili John at about 10am on Thursday and took the body to the mortuary of Michael Hospital, Umuoji for autopsy.

Giving further insight into the development, the Police Public Relations Officer in the state, Haruna Mohammed, a Superintendent of Police, said that the deceased had his hands tied behind his back with bruises all over his head.

He said that the Commissioner of Police in the state, CP John Abang, had ordered a full scale investigation into the ugly development to unravel the circumstances surrounding the incident with a view to bringing the perpetrators to justice.

Haruna, however, implored the members of the public whose relations went missing and whose description matched the one attached to the police report to go to Ojoto Division for possible identification of the body.