Nigeria's Gross Domestic Product has increased to 2.28 per cent in real terms in the third quarter of 2019. 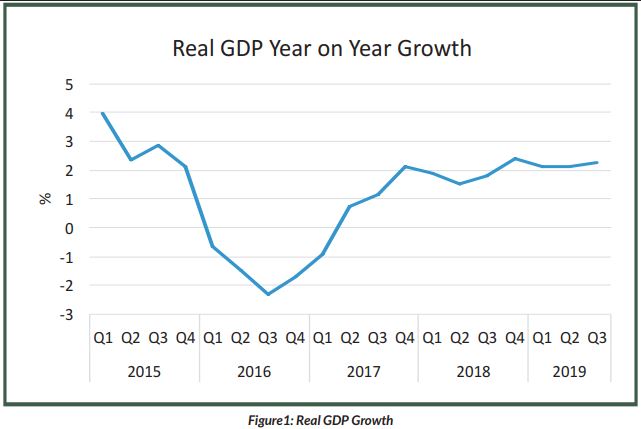 According to a report by Punch Metro, the nation’s Gross Domestic Product increased to 2.28 per cent in real terms in the third quarter of this year, the National Bureau of Statistics said on Friday.

The NBS, in its latest quarterly GDP report, said the real GDP growth rate in Q3 indicated an increase of 0.17 percentage points compared to the 2.12 growth rate recorded in Q2 2019.

“The growth rate in Q3 2019 represents the second-highest quarterly rate recorded since 2016,” it said.

The country recorded an average daily oil production of 2.04 million barrels per day in Q3, its highest in more than three years, according to the report.

According to the NBS, aggregate GDP stood at N37.81tn in nominal terms in Q3, compared to the N33.37tn recorded in the third quarter of 2018, representing a year-on-year nominal growth rate of 13.30 per cent.

The statistics bureau reported in September that GDP growth rate fell to 1.94 per cent in Q2 from 2.10 per cent in Q1.

A global credit rating agency, Fitch Ratings, said in June that the Nigerian economy would continue to experience a sluggish recovery, predicting that the GDP growth would average 2.2 per cent in 2019-2020, below its previous 10-year average of 4.2 per cent and the current ‘B’ median of 3.4 per cent.

It said high unemployment and inflation would constrain private consumption while investment was held back by tight credit supply, a weak business climate and regulatory uncertainty in the oil sector.

Another rating agency, Moody’s Investors Service, also said in June that Nigeria was trapped in a low growth path for the time being.