The discovery of a lion inside a building in Lagos has left many people especially neighbors still in shock. 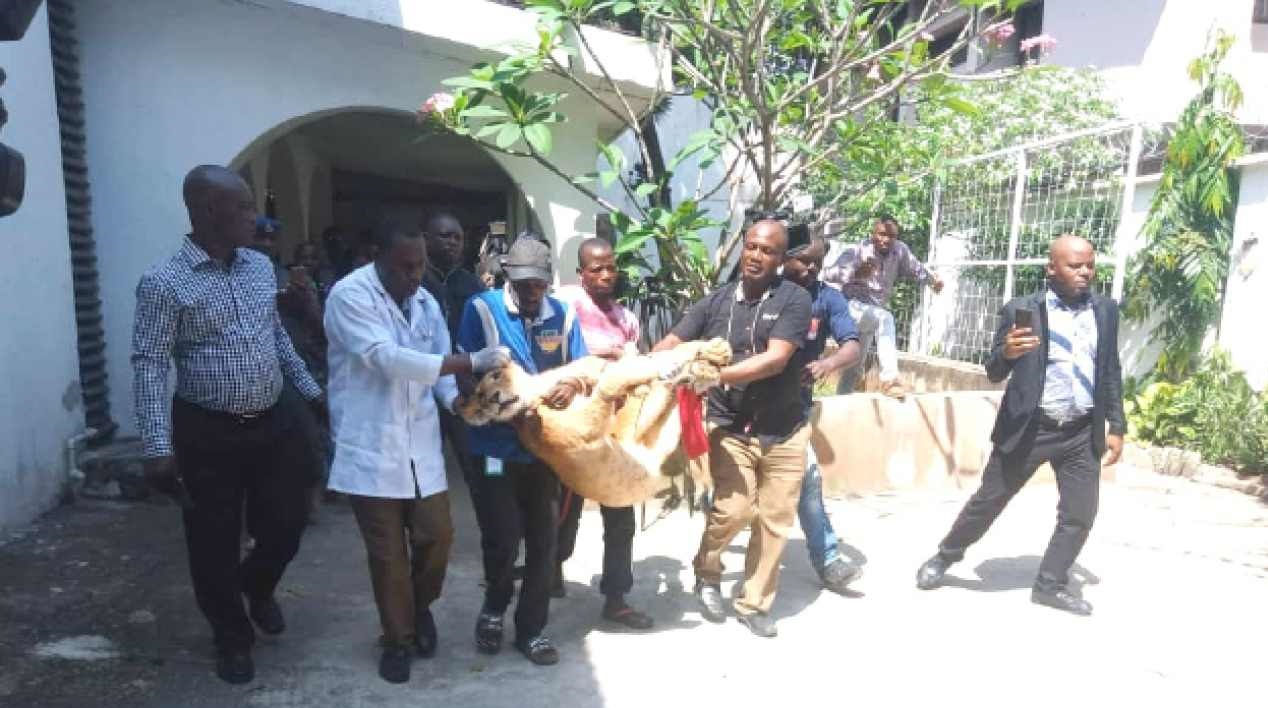 The lion was taken to the zoo

Residents and workers along Muri Okunola Street, Victoria Island Lagos are still perplexed by the fact that they have been living and doing their businesses with a lion on the street unknown to them.

An Indian national had been hunted by policemen in Lagos for allegedly keeping a two-year-old lion at his 229 Muri-Okunola residence. Next to the house is a nursery and primary school, while on the same street are organisations including Zenith Bank, Union Bank, DHL, Diva Cakes, Mouth Spa Dental Clinic, Eye Clinic and a few residential houses, among others.

Lions according to experts are wild animals, carnivorous in nature and very aggressive. They have never been tamed. If a person keeps a lion in his home, the owner is at great risk, so are people in the neighbourhood.

“There are chances that the owner may turn his back towards the lion, which may trigger his hunting instincts and attack on its owner. Lion is a carnivore and will not hesitate to attack any human to eat him.

“Though, there have been lions in captivity that can be friendly, but never 100% trusted because of their innate ability to be wild. They are not an animal to ever have complete trust in.”

Our reporter who visited the street observed that many residents and workers on the street were ignorant of the presence of a lion at the residence. They only have knowledge of a giant and ‘scary’ dog owned by the Indian.

“We never knew that we have been living with a wild animal on the street, it’s really shocking,” some of the residents expressed.

Recently, a rumour broke out that a lion is being harboured by a resident of Muri-Okunola Street. Our reporter gathered that residents of the street disbelieved the rumour but out of fear of the unknown made reports. Considering the strength of their petitions, the Lagos State Taskforce swung into action by detailing a team of policemen from the Agency to carry out discreet investigation into the authenticity of the claims.

Investigation by the team however revealed that the owner of the house who is an Indian national had brought the endangered specie from Cameroon to Nigeria.

According to the chairman of the Lagos Task Force, Olayinka Egbeyemi, the Indian had allegedly smuggled the lion into Nigeria from Cameroon while neighbours have continued to wonder how he was able to smuggle the wild animal into Nigeria without the knowledge of security operatives at the border.

However, investigation by Daily Trust revealed that those who keep lion as pets at home are likely to belong to a club and they also sell cubs.

Investigation further reveals that each cub is sold as high as N2.5million to N3million depending on the colour of the lion. With this discovery, it is now lucrative to have wild animals as pets at homes.

Someone living close to the residence where the lion was kept told our reporter that no one in the house goes close to the lion except the owner who feeds it with raw goat or cow meat.

It took the joint operation of operatives of the Lagos State Task Force together with the State Ministry of Agriculture and medical personnel from the Faculty of Veterinary Medicine, University of Ibadan on Monday to successfully evacuate and relocate the lion to a zoo at Omu Resorts in Lekki. The lion was eventually evacuated from the house after over 72hours surveillance.

Egbeyemi made known that Dr. Ogunmo Bamidele, who led the medical team from the University of Ibadan, had to tranquilise the lion thrice before they were able to evacuate it to the zoo.

Prior to the evacuation of the cub, the Indian prepared an enclosed cage at his home where he keeps the wild animal. It was learnt that he used the lion as security to guard his house in spite of the security guards he employed to watch over the house.

Neighbours however expressed joy over the evacuation of the lion from the vicinity, saying, it is highly risky living with an animal that lives on flesh.

A staff of one of the companies on the street said “I have been working here for years but I never had an idea that there was a lion close to me here. Even when the rumour broke out, I didn’t still believe it. On the day of the evacuation, I told one of the security men that there was no lion in the house but a giant dog. I was dumbfounded when the lion was brought out.

“I quickly imagined the risk workers in the house, children and workers in the school next to the building and even other neighbours on the street were exposed to. Lions by their nature are not designed to live at home and that is why they are called wild animals. Even the owner who gives it food may not be safe on the day it will wreck havoc. If nobody lives in the house, and it is being guarded by human beings, lion and a huge dog, then, something is fishy,” he said, while he stressing the need for security men to comb the house again and to continually put an eye on the house to ascertain activities going on in the house.”

“This house needs to be investigated because nobody knows what is going on in there. In fact, the fence should be pulled down and replaced with iron-bars as fence for transparency sake,” another neighbour said.

A trader along the street also expressed shock, saying, if she had known there was a lion anywhere close, she wouldn’t have ever allowed her toddler play around in her business premises.

“I was surprised on Monday when I saw vehicles lined up in front of the house with security personnel. In fact, I almost fainted when I saw that a lion was truly brought out of the house. I never believed until I saw it,” she said.

She called on government to embark on a search to houses in high brow areas with a view to exposing illegal activities and evacuating wild animals from such homes.

Egbeyemi, who commended residents around Victoria Island for their quick action, called on the public to be observant in their immediate environment and report any strange or unusual activity to appropriate government authority for prompt action.

He assured residents that the owner of the lion will be made to face the full wrath of the law, warning residents to desist from harbouring wild animals that endanger the lives of others.