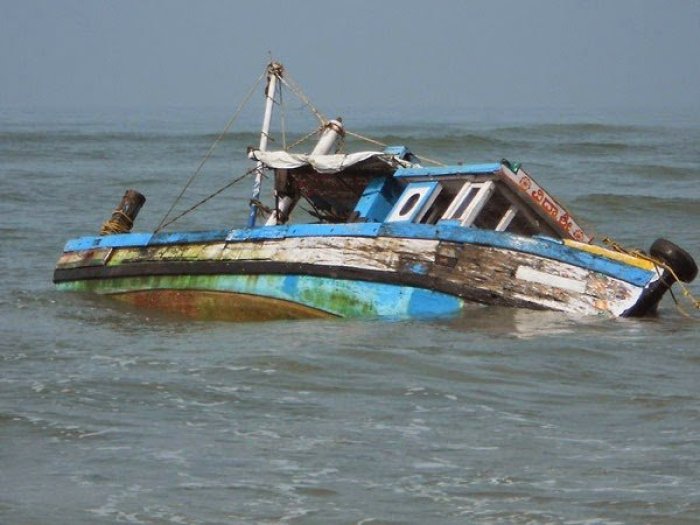 According to a report by Punch Metro, as many as 11 passengers were rescued when a boat conveying 13 passengers had a head-on collision with a Nigeria Port Authority tug boat with the inscription, Larana, and marked No. 9252723, in the Itun Agan area of Amuwo-Odofin, Lagos State.

Following the collision, PUNCH Metro gathered that the wooden boat, which one John Adesuyi, used in conveying the 13 passengers, capsized and all the passengers fell into the water.

Emergency responders, who stormed the scene of the accident, were said to have rescued 11 of the passengers, while two others were still missing as of the time of filing this report.

The Police Public Relations Officer in the state, Bala Elkana, said in a statement on Sunday that a search and rescue operation involving marine policemen, firefighters and the Lagos State Emergency Management Agency was still ongoing.

Elkana said, “On Wednesday, November 20, 2019, around 8.15am, a wooden boat fitted with 30HP Yamaha engine, operated by one John Adesuyi of the Itun Agan community, Amuwo-Odofin, with 13 passengers on board, allegedly collided with an NPA tug boat, with the inscription, Larana, and No. 9252723, at the Itun Agan area, Amuwo-Odofin.

“Consequently, the wooden boat capsized and the passengers fell into the water. However, a search and rescue team involving marine policemen, Lagos State firefighters, LASEMA and other emergency management agencies swiftly mobilised to the scene. Eleven of the passengers were rescued, while two others are still missing. Meanwhile, a search and rescue operation is ongoing.”

In a related incident, 26-year-old Sodiq Yusuf has allegedly drowned while swimming inside the National Stadium’s swimming pool in the Surulere area of the state.

Elkana said a team of policemen rushed the victim to hospital, where he was confirmed dead, adding that the corpse had been deposited in the Mainland General Hospital’s morgue for autopsy.

The PPRO stated, “On Sunday, November 17, 2019, around 6.10pm, the police received a distress call that one Sodiq Yusuf, 26, of No. 26 Hogan Bassey Street, Surulere, allegedly got drowned while swimming in the National Stadium’s swimming pool in Surulere. A team of policemen was mobilised to the scene.

“The victim was rescued and rushed to the Randle General Hospital, Surulere, where he was confirmed dead. The corpse was deposited in the Mainland General Hospital’s morgue in Yaba for autopsy. An investigation is ongoing.”

In another development, a factory worker, Sunday Usenobong, died from injuries he sustained during an industrial accident, while working at the factory of the Landcraft Industry Nigeria Limited at the Odogunyan Industrial Estate in the Ikorodu area of the state.

Elkana said the 50-year-old fell inside a melting pot, while operating the company’s machine, and died on the spot, adding that homicide detectives, who visited the scene of the accident, evacuated the corpse.

He said an investigation into the incident was ongoing.

Elkana stated, “On Friday, November 22, 2019, around 3.30pm, one Sunday Usenobong, 50, an employee of the Landcraft Industry Nigeria Limited, Odogunyan Industrial Estate, Ikorodu, allegedly fell inside a melting pot, while operating the company’s machine.

“Consequently, the victim died on the spot. Homicide detectives visited the scene and the corpse was evacuated to a public morgue for autopsy. An investigation is ongoing.”

Similarly, one Femi Olatunde, while operating a moulding machine for the Multipak Nigeria Limited, on Plot F28 Kudirat Abiola Way, in the Oregun area of the state, allegedly got trapped in the machine and died on the spot.

Elkana, who confirmed the incident, said homicide detectives had evacuated the corpse to the mortuary for autopsy, adding that investigation into the case was ongoing.

He stated, “On Tuesday, November 19, 2019, around 8.20pm, a moulding machine operator, one Femi Olatunde, 35, at the Multipak Nigeria Limited, located on Plot F28, Kudirat Abiola Way, Oregun, Lagos State, allegedly got trapped while operating the machine.

“Consequently, the victim died on the spot. Homicide detectives visited the scene and evacuated the corpse to a public morgue for autopsy. An investigation is ongoing.”

Reacting to the spate of industrial accidents in the state, the Director General, Lagos State Safety Commission, Lanre Mojola, said in a statement that the state government had declared zero tolerance for factories and private organisations violating safety rules and regulations, adding that it had sealed off Multipak Nigeria Limited.

According to Mojola, the company’s violation of safety rules and regulations, poor housekeeping and lack of signage led to the untimely death of Olatunde, whose head got stuck while operating one of the machines.

He stated that Governor Babajide Sanwo-Olu’s administration was passionate about the safety of lives and property of the residents.

“On no account should any factory operate without putting in place safety equipment, quality housekeeping, signage, good wiring system and a clean environment devoid of hazards to the lives of workers and visitors,” Mojola said.

He urged organisations and individuals to embrace best international safety practices in their operations to prevent fatal incidents that endanger lives, adding that the safety of lives and property was a collective responsibility and warned that factories that violate safety rules would be sanctioned.

Meanwhile, two members of the Aiye and Eiye confraternities have been arrested by the Lagos State Police Command for attempting to maim two occupants of a vehicle in the Iyana Ipaja area of the state.

The suspects, Abbey Kolawole and Ikenna Eze, were arrested by residents of the area and handed over to operatives of the Rapid Respond Squad.

Kolawole and Eze, in company with one Femi, who is currently at large, were said to have accosted the occupants of the vehicle, who were having a discussion, and ordered them to alight from the vehicle.

It was gathered that when the victims refused to alight from the vehicle, the gang leader, Femi, shot in the air and threatened to shoot the victims.

However, residents of the area apprehended Kolawole and Eze and handed them over to the RRS operatives, while Femi escaped.

Eze, in his statement to the police, alleged that Femi had threatened to kill one of the occupants of the vehicle because he had earlier stormed Femi’s residence in Agege Abattoir in company with other cult members and threatened to kill him, adding that Femi, in retaliation, wanted to maim the yet-to-be-identified victim.

He said, “Femi invited us to the house of one of the occupants of the vehicle, who is a resident of Shagari Estate, Iyana-Ipaja, with the intent of killing him, because he had threatened to kill Femi.

“The man had earlier gone to Femi’s residence in Agege Abattoir in company with cult members and threatened to kill him, but Femi wanted to maim the man first. Our plan was to shoot the man in the leg but after firing the first shot in the air, the gun hooked and before he could reload it, residents had gathered to check what was happening and were moving towards us; so, we fled in different directions and abandoned our gun.

“Femi was the one who knew the area; he escaped while we strangers in that community, were arrested.”

According to the police, a locally-made double-barrelled cut-to-size shotgun, three live cartridges and one expended cartridge were recovered from the suspects, who confirmed that they were members of the Aiye and Eiye confraternities.

Commending the residents of the Shagari Estate in the Ipaja area for cooperating with the police in the arrest of the robbers, the state Commissioner of Police, Hakeem Odumosu, urged other communities in the state to partner the personnel of the command in fighting crime.