Woman And Her Baby Detained By Hospital Over N160,000 Medical Bills


A woman and her baby have been detained by a hospital over a N160,000 medical bills in Lagos state. 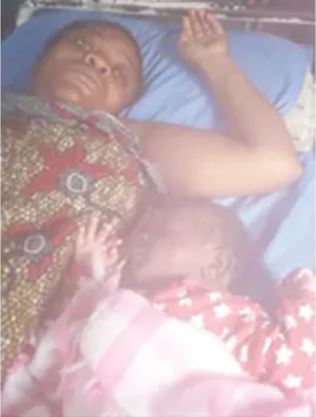 According to a report by NewTelegraph, the Tamara Medical Centre, located at Akute, Ogun State, has allegedly detained a woman, Angela Morgan and her two-weeks-old baby, Victor,  over unpaid medical bills.

Angela had her ante-natal at the hospital nine months ago, but the doctor later told her husband, Joseph Morgan, that she would have to go through a Caesarean Section.

Joseph, a dry cleaner, said that when the doctor told him about the operation on November 13, he was speechless. According to him, he had only saved N35, 000 in preparation for the delivery of the baby. He never bargained for any complication. He is presently trying to raise N160,000 to pay the hospital, while his wife can no longer walk due to failing health.

He said: “When I was told the only way my wife could survive was through a Caesarean Section, I was worried. The first idea that came to my mind was to run away and leave her to her fate. But I couldn’t do that; I was the one who got her pregnant. I summoned courage, stayed back and prayed to God for a miracle.”

He said that it was because the doctor knew him that he allowed him to deposit N30, 000 before the commencement of the operation.

Joseph said: “The operation was successful. But since then, I had not been able to pay the balance, which made the hospital to detain my wife and baby. My baby is now two weeks old. The hospital has also stopped attending to my wife. Whenever she’s going to toilet, nurses monitor her. They think she would escape. They have stopped giving her drugs, while she’s confined to the bed. She cannot walk and finds it difficult to speak well as a result of pains from the surgery. I’m supposed to balance the hospital N160, 000. Even the treatment given to my baby by the hospital has also stopped. I’m praying to God to save my wife and baby. I don’t know where to run to. I am fed up of the whole situation.

“Before my wife’s treatment was stopped, the doctor told me she needed blood transfusion. I made efforts and I was able to buy one pint of blood out of the two pints needed. I’m appealing to Nigerians to come to our aid because my wife is dying at the hospital. She cannot even breastfeed our baby.”

It was also gathered that the baby was christened Victor in the hospital.

Angela, who also spoke with our correspondent, said that it was not easy sleeping in one position for so long. She however thanked God for everything.

She said: “I still believe I’ll stand up one day soon. I know that if there are drugs available, my health wouldn’t be this bad. It’s true nurses are always guarding me, but I cannot escape. Nigerians should come to our aid. My husband and I don’t know what else to do.”

The Chief Medical Director of Tamara Medical Centre, Dr Awusa C.S, said: “We didn’t detain the woman and her baby. What happened was that the woman had been using our facility since she was pregnant. When it was time to give birth, we discovered she couldn’t deliver on her own. That was why we opted for the Caesarean Section. When it was time for the operation to be conducted, I asked the husband to deposit N200, 000, but he was only able to deposit N20, 000. I ordered for the operation to be done. It was some people, who came to visit the family that later gave them the money for the two pints of blood she needed. We didn’t stop the medication for mother and baby. Right now, she needs another pint of blood, which is why she can no walk.”