A young man has been nabbed while he was busy robbing commuters on the Lagos-Ibadan expressway. 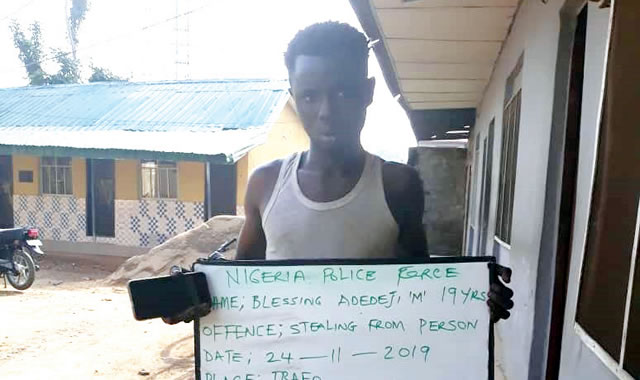 According to a report by Punch Metro, the Ogun State Police Command, on Thursday, said it had arrested a member of a robbery gang, Blessing Adedeji, while dispossessing commuters of their belongings on the Lagos-Ibadan Expressway.

The Police Public Relations Officer in the state, Abimbola Oyeyemi, said the suspect was sighted by policemen in gridlock attacking the occupants of a Toyota Camry with a knife.

Oyeyemi added that the suspect later succeeded in dispossessing one Monsurat Ologundudu of her Tecno Camon-12 phone valued at N48,000 and a purse containing N3,000.

He explained that the suspect took to his heels on sighting the policemen, but he was given a hot chase and apprehended by the cops.

The statement read in part, “Men of the Ogun State Police Command on Sunday, November 24, 2019, arrested one Blessing Adedeji, a member of a robbery syndicate that specialises in robbing commuters of their belongings on the Lagos-Ibadan Expressway.

“The suspect was arrested by policemen on surveillance patrol of the Magboro area of the expressway led by the DPO, Ibafo Division, SP Abiodun Ayinde.

“The suspect was sighted by the policemen in the gridlock occasioned by the construction work going on attacking the occupants of a Toyota Camry car with a knife and had succeeded in dispossessing one Monsurat Ologundudu of her Tecno Camon-12 phone valued at N48,000 and a purse containing the sum of N3,000.

“On sighting the policemen, he took to his heels but was chased and apprehended. The stolen items were recovered from him and released to the owner.”

The PPRO added that the Commissioner of Police in the state, Keneth Ebrimson, had ordered the immediate transfer of the suspect to the Special Anti-Robbery Squad for discreet investigation.

He said the CP assured commuters plying the road of adequate security at all times.