The traditional rulers urged Buhari to also rescind his order banning supply of petroleum products within 20kilometres radius of the border. 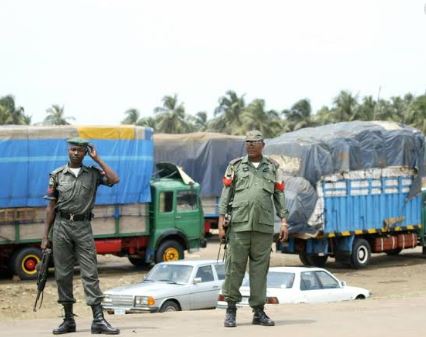 Traditional rulers and residents of border communities in Ogun State on Thursday, cried out to President Muhammadu Buhari, over their worsening plights with the closure of the borders, saying “the policy is killing” them.

Six traditional rulers, including the Onihunbo of Ihunbo Kingdom, Oba Joseph Adesiyan; a historian; Prof. Anthony Asiwaju, and scores of residents from over a dozen communities, said evacuation of farm produce, and poultry products by local farmers have become impossible as overzealous border task force involved in the ‘Operation Swift Response’ allegedly harass them under the guise that farm produce were smuggled items.

Addressing a press conference in Abeokuta, the state capital, the leaders of the border communities under the aegis of Ogun West Consultative Forum (OWECOF) and other Stakeholders, urged President Muhammadu Buhari to review the border closure and reduce the hardship they face daily.

The traditional rulers urged Buhari to also rescind his order banning supply of petroleum products within 20kilometres radius of the border.

They lamented that men of the Nigeria Customs Service (NSC) have made life more miserable for them, all in the name of upholding the presidential ban order on petroleum.

OWECOF’s spokesperson and a Professor of African Comparative History and Borderland Studies, Anthony Asiwaju, alleged that the order, prohibiting petroleum movement by 20 kilometers to border communities, has brought untoward economic hardship to the innocent Nigerians living in the areas who have nothing to do with economic sabotage popularly referred to as smuggling.

According to Asiwaju, the presidential order has criminalized the entire law abiding people of Yewa–Awori land of Ogun West Senatorial district, who are principally affected by the policy.

He explained that the order is also having an economic hardship on the people of the area as well as its attendant loss of lives.

“With the regular suffering of infrastructural deprivation and political marginalisation, the people of the territorial authorities and communities in border areas of Ogun State are now having to stand a wide range of human abuses,” he said.

The Professor noted that it is inappropriate to “use a unit to judge the whole.”

OWECOF also declared that the federal government’s reasons advanced for closing the borders and also restricting petroleum movement by 20 kilometers to the border were serious indictment on the ability of the NCS officials at effectively policing the Nigerian borders and as such, should not be blamed on residents of the border communities.

The people, however, appealed to the federal government to call the security operatives enforcing the border closure and ban on petroleum to order before they succeed in eradicating them all.