NDLEA Arrest Man With 800g Of Drugs In Kwara


She said the suspect was arrested on Nov. 22 in Omupo, Kwara state following information from a reliable source to the Agency. 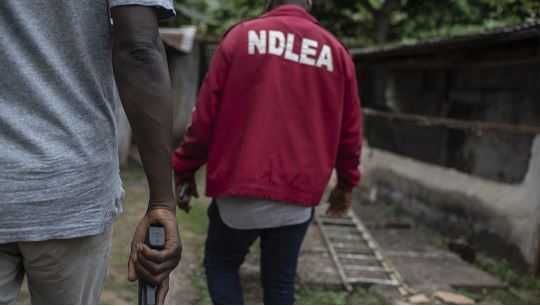 This was contained in a press statement signed by the Agency’s Public Affairs Officer, Abigail Adebija in Ilorin on Friday.

She said the suspect was arrested on Nov. 22 in Omupo, Kwara state following information from a reliable source to the Agency.

Adebija said the suspect was arrested with 800 grams of psychotropic drugs comprising 400 grams of Tramadol, 225 milligrams and 400 grams of Exol 5.

She said that the arrest revealed the new mode of concealment used in trafficking drugs within the State.

The statement reads: “Drug dealers now hide illicit drugs inside some sealed compartments of vehicles that officers would ordinarily overlook while carrying out routine stop and search during motorized patrol.

“It took operatives of the Agency more than two hours to discover the compartment where the drug was hidden in the bus,” Abigail said.

“The investigation so far showed that the suspect specialised in concealing banned psychotropic drugs among prescription drugs.

“The suspect distributes the banned drugs to patent medicine dealers and other petty traders in different parts of the State.

“Before his arrest in Omupo town, the suspect revealed that he had visited Oke-Ode, Ajase, Igbaja, Yaru and Babanla towns, where he distributed large quantities of tramadol to his customers

“The suspect would be charged to court as soon as investigation into the case is concluded.

“The State Commander, Ambrose Umoru urged stakeholders and residents of the state to always volunteer useful information on illegal drug activities in the State, as this will go a long way in assisting the Command in carrying out its statutory responsibilities.”