Joshua-Ruiz II Is Like Nothing We've Ever Seen Before


It's a fitting home for the fight - a completely new venue in an unthinkable location to host a fight that can't quite be pegged in historical terms either. 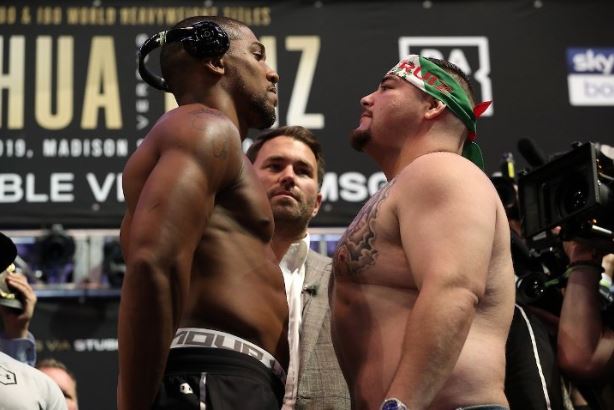 As Andy Ruiz Jr. and Anthony Joshua make their final preparations for Saturday’s heavyweight title rematch, a team of 175 builders are putting the finishing touches on the venue that will house it, the Diriyah Arena in the Saudi Arabian capital of Riyadh.

About a month and a half ago, the arena was nothing more than a plot of land with a few steel beams erected, but now it is a full-on 15,000 seat outdoor event center.

It’s a fitting home for the fight- a completely new venue in an unthinkable location to host a fight that can’t quite be pegged in historical terms either.

When Ruiz upset Joshua on June 1 of this year, it was rightfully called one of the most shocking upsets in boxing history. There had been others, of course, that were bigger in terms of the width of the betting lines, but Ruiz’s victory was startling for reasons beyond the perceived difference in talent according to bookies. As a late-notice replacement for Jarrell Miller, who tested positive for three difference illegal substances and had himself ousted from the bout with Joshua, Ruiz with his fleshy physique no doubt put organizers at ease about the forthcoming post-fight drug test results. Nothing Ruiz was putting in his body could be performance-enhancing, right?

As it turned out, he didn’t need it. After surviving an early knockdown, Ruiz battered Joshua, dropping him again and again until referee Michael Griffin had seen enough. The image of the portly Ruiz jumping for joy as the Adonis-like, chiseled Joshua rested on the ropes in defeat was as unlikely a scene, visually, as one could possibly even script.

But Joshua-Ruiz’s place among all-time shocking upsets is where the fight, and this rematch’s accurate alignment with historical bouts kind of ends, mostly because it’s difficult to determine what exactly history will think of either Ruiz or Joshua. In many ways, the magnitude of the upset in the first bout will be determined by what happens in the rematch. If Joshua can avenge defeat, it will show that the result of the first fight wasn’t what should have happened. If Ruiz carves through him again however, it would show that both fighters were just poorly scouted, and the bouts just as poorly prognosticated from the start.

That’s why it’s most appropriate to describe the upset in the first contest as “shocking” rather than “big.” A big upset suggests something that shouldn’t have happened—a bout that would have yielded a different result 99 times out of 100, and the one that played out was the outlier. The biggest upsets in boxing history, the ones Ruiz’s victory have been listed alongside, typically proved to be exactly that. Buster Douglas lost his title in the next fight after beating Mike Tyson, Leon Spinks lost his rematch with Muhammad Ali, James Braddock was KO’d after defeating Max Baer.

Ali and Tyson, for example, were undeniably great, regardless of those results and whether they were ever avenged (and in Tyson’s case, it wasn’t). Joshua, like them, was the highest profile heavyweight of the day heading into the first contest. However, his stature is and was unquestionably greater than his resume. Without having faced, let alone defeated the other heavyweight champs expected to challenge him, Deontay Wilder and Tyson Fury, Joshua became one of the richest fighters ever, and one of the biggest box office attractions the sport has ever seen. That isn’t so much an indictment of Joshua’s accomplishments, which in and of themselves are impressive still, but a lauding of the remarkable wealth and popularity he’s amassed.

There hasn’t been a fighter who has become this rich and this popular without also going down as a Hall of Famer. Even brief cultural phenomena like Naseem Hamed and Ray Mancini might not have amounted to the over-the-moon expectations placed upon them during their peaks, but they still made it to the Hall. If Joshua lost Saturday’s rematch and his career fizzled from there on out, would he wind up in Canastota? And if not, will we remember Ruiz’s victory—and potentially victories—over him as upsets, or merely revelations?

Saturday’s event itself has been compared to the Rumble In The Jungle or the Thrilla In Manila, which is accurate in that they were heavyweight title bouts that took place in unique locations under the shadow of oppressive political regimes. Of the participants in those bouts, the only one either fighter could really be compared to is Joshua, to George Foreman. Had Foreman not come back after that loss, as many believed he wouldn’t, and hadn’t had the Fight of the Year two years later, knocked Joe Frazier out again, and more importantly, had an unthinkable second chapter two decades later, he would obviously have been remembered much differently.

The course of Joshua’s career, and perhaps ultimately his legacy, rests on this fight, and as a result, so does our categorization of Ruiz’s magical win this past June. If Ruiz is as good as he appeared to be the first time, as good as perhaps we should have thought he was, then this story will be told in a completely different way 20 years from now.

Either way, we’ll have witnessed one of the most shocking, and maybe two of the most unique moments in the history of boxing.