Two Nigerian journalists have been reportedly detained for taking photos during the trial of Agba Jalingo. 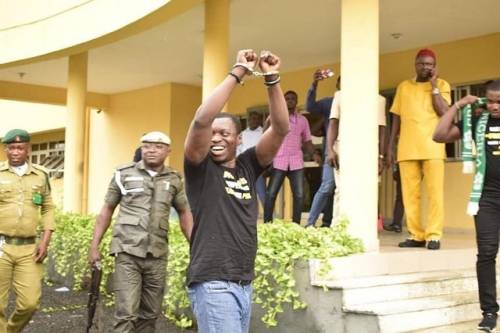 According to SaharaReporters, two photojournalists, Mr Leo Ashiebe and Mr Patrick Obia, have been detained by the Police in Cross River State for taking photos during ongoing trial of detained journalist, Agba Jalingo.

The trial of Jalingo was yet to begin when the photojournalists were taking photos of the court premises.

They were summoned to the chamber by the presiding judge, Justice Simon Amobeda, for questioning, it was revealed.

A journalist, who doesn’t want to be named said, “Mr Leo Ashiebe had just been summoned by one of the judges at the Federal High Court in Calabar.

“He was filming when on of judge’s police orderly called him from Court 2 where Justice Simon Amobeda sits and asked him to follow him.

“Another photojournalist, Patrick Obia was summoned by the judge into his chambers.

“He took photographs of Agba Jalingo’s arrival in court at about 9:22am.

“He proceeded to take some images in the courtroom (Court 2) where Justice Simon Amobeda sits."