Smart Adeyemi of the All Progressives Congress has attacked Dino Melaye after defeating him over the weekend. 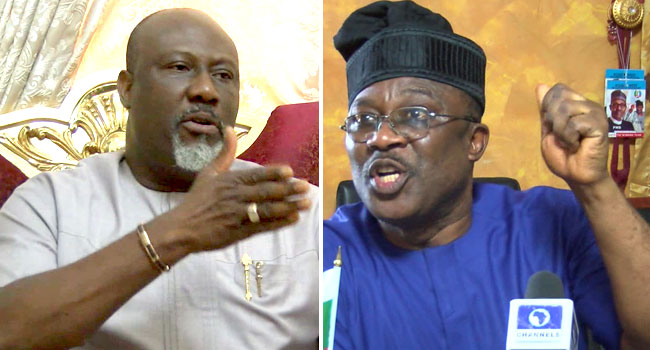 Dino Melaye and Smart Adeyemi
After defeating Dino Melaye, the All Progressives Congress member in the last Kogi West senatorial election, Smart Adeyemi has broken his silence.
Recall that Smart on Saturday, November 30, 2019, defeated Melaye in the rerun of Kogi West Senatorial election.
While Dino questioned the result of the election, Adeyemi has since continued to enjoy his victory.
Reacting to the election, Melaye via his Twitter handle said, he won the election, adding Adeyemi remains his political wife.
He tweeted: “The reaction of men and women of goodwill all over Nigeria especially the wonderful people of Kogi west who truly voted for me is a testimony that God is with me and with us all. I won the election and Adeyemi remain my political wife.”
Speaking with journalists on Sunday, December 1, 2019, Adeyemi described Melaye as his political servant.
He said: “When a servant steals the garment of his master, the garment will be too big for the servant… the joy of having his master’s garment will cause the servant to misbehave to people he ordinarily could have respected. The over-sized garment made Melaye to misbehave while in the senate.”
Watch video below:
Top Stories