IPOB Clears The Air On Killing Policemen In Anambra


The group, on the contrary, said it was the police that killed three of their members and took away their corpses to conceal the act. 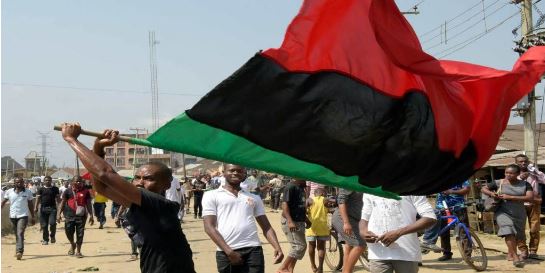 The Indigenous People of Biafra has denied alleged attack and killing of two policemen in Oraifite, Ekwusigo Local Government Area on Monday.

The group’s spokesman, Emma Powerful said the allegations by the Police in Anambra that it killed two of its men when they visited the house of their leader’s lawyer, Barr Ifeanyi Ejiofor’s home was a lie.

The group, on the contrary, said it was the police that killed three members of the IPOB and took away their corpses to conceal the act.

A press statement by Emma Powerful exonerated the group from the alleged attacks, insisting that it was the police who set the home of Ejiofor on fire, while one of its trucks was also gutted because the police handled the fuel used in setting the house on fire carelessly.

Part of the release read, “The unprovoked Nigeria police and army invasion of the home of our lawyer Barrister Ifeanyi Ejiofor barely four days after the painful burial of his senior brother is proof that those running Nigeria have descended into the abyss of iniquity from which they may never recover.

“Not even during the darkest days of Abacha’s dictatorship did anyone witness such brazen intimidation of a legal counsel or the attempted assassination of a defence counsel in a high profile case.

“For the police to say there was a criminal complaint against Barrister Ejiofor bothering on assault and kidnapping four days after the funeral of his brother is most stupid and laughable. A criminal complaint from who? Who did he kidnap, the body of his dead brother?” The group queried.

The statement further stated, “The only reason for this unprovoked criminal invasion with deadly intent is to kill Barrister Ejiofor and to stop him from attending Federal High Court Abuja next month where he has all but defeated the Attorney General in the matter of Federal Government of Nigeria versus IPOB.

“It is the same strategy of ‘invade and kill’ doctrine that was deployed at Isiama-Afaraukwu the home of our leader on 14 September 2017 a month before he is due in court that is played out in Oraifite yesterday.

“The truth remains that Nigeria Police and Army went to the home of Barrister Ifeanyi Ejiofor with the sole purpose of killing him before next month’s court date as is now their tradition.

“On getting there they opened fire on unarmed civilians as usual and the two men that came out of the house were shot dead instantly. The police carried their dead and dying bodies into their van to conceal evidence and drove off. These are facts backed by evidence Anambra Police cannot deny.

“After killing two unarmed and innocent civilians, before they left the police doused Barrister Ejiofor’s home with petrol and set it on fire. This was the reality yesterday in Oraifite Anambra State. It was the carelessness of the police in handling the petrol they used to drench Barrister Ejiofor’s home and nearby businesses before setting them on fire that trailed back and led to the fire that gutted their van.

“It is on record that IPOB remains a peaceful movement, therefore, this latest desperate attempt by this lying Fulani controlled Nigeria Police to equate our activities with their home-grown Miyetti Allah (Fulani herdsmen) terrorist organisation is a waste of time.”