A man has revealed how much he hates his kids and has attempted committing suicide because he never wanted a child. 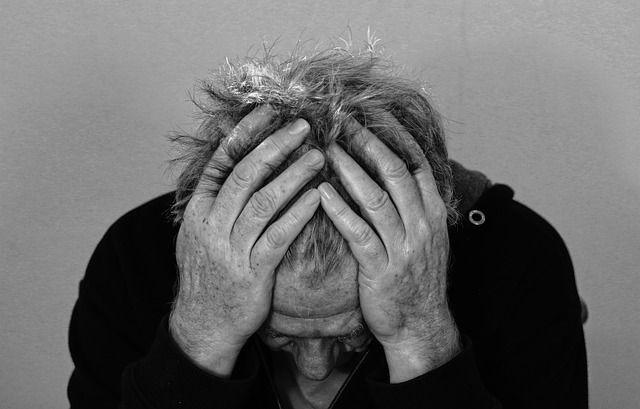 A man has confessed that he hate his kids and resent his wife too because of their children.

The man revealed that because of how much he hate his kids, he has attempted committing suicide because he never wanted a child but his wife made him choose between her and having children.

In the shocking confession, the man wrote;

I never wanted kids. Never saw myself as a family man. I now have 3 kids. They are all amazing. I hate them more than anything.

I hate being needed. I hate the whining. I hate how they have ruined my life. I hate how I can’t do the things I want to do because they exist.

I also resent my wife or making me choose between losing her or having kids. She gave me an ultimatum and i’ve realized I made the wrong choice.

I don’t hate children in general. And if other people want to have kids, more power to them. But I feel like this is the biggest mistake i’ve ever made. The stress is so bad that i was put on 72 hours suicide watch at the hospital. I would rather kill myself than continue down this road.

But I’m trapped. I had these kids. I made this terrible decision. So now I have to do my best to be amazing dad for them. And I do my best. Just because I hate them, it doesn’t mean they deserve a shitty life. I got no good emotion from being a father. Hearing them laugh, or tell me they love me does nothing for me. If my wife and kids died in a fiery car wreck, I doubt i’d even cry.

I want to leave, but they don’t deserve a broken home. And by the time they are 18. the economy will probably be so collapsed that it will be normal for several generations of family to live under one roof. and i’ll be trapped. I want to leave them, but I was raised better. And anytime I start to put my escape into motion, i feel guilty. Not sad. guilty 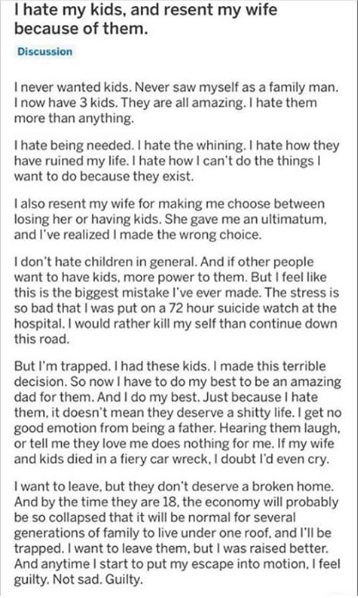