It Is A Shame Mane Finished Fourth In Ballon d'Or - Messi


The Barcelona forward has held the Senegal international in high esteem after a fantastic year with the Reds. 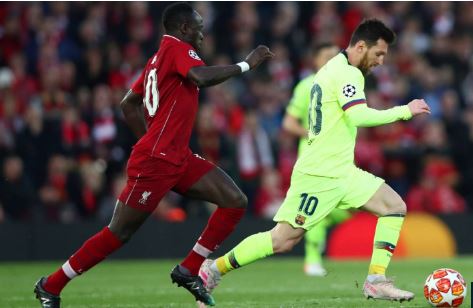 Lionel Messi has stated Sadio Mane was his pick for the 2019 Ballon d'Or because of his achievements with Liverpool.

The Argentine beat Mane's teammate Virgil van Dijk and his eternal rival Cristiano Ronaldo to the gong in Paris on Monday night for a record sixth time, while Mane polled fourth.

"But I think there have been a lot of great players this year. That’s why it was difficult to choose a particular player. ‘But I chose Sadio Mane because he’s a player that I like.

"Mane achieved a great year that was exceptional for the entire Liverpool team. That’s why I chose him. ‘

"I repeat, there were a lot of very great players this year, so the choice was difficult."

Mane was a key cog in the Liverpool side that won the 2018-19 Champions League and finished a close second in the Premier League, scoring 26 competitive goals and providing five assists.

In the current campaign, he has already had a hand in 20 goals (13 goals, seven assists) in 21 competitive appearances, with the Reds holding an eight-point lead in the English top-flight.