Omoyele Sowore All Smiles After Being Released By DSS (Photo)


Omoyele Sowore, and his co-detainee, Adebayo Bakare have finally been freed by the DSS following a court order. 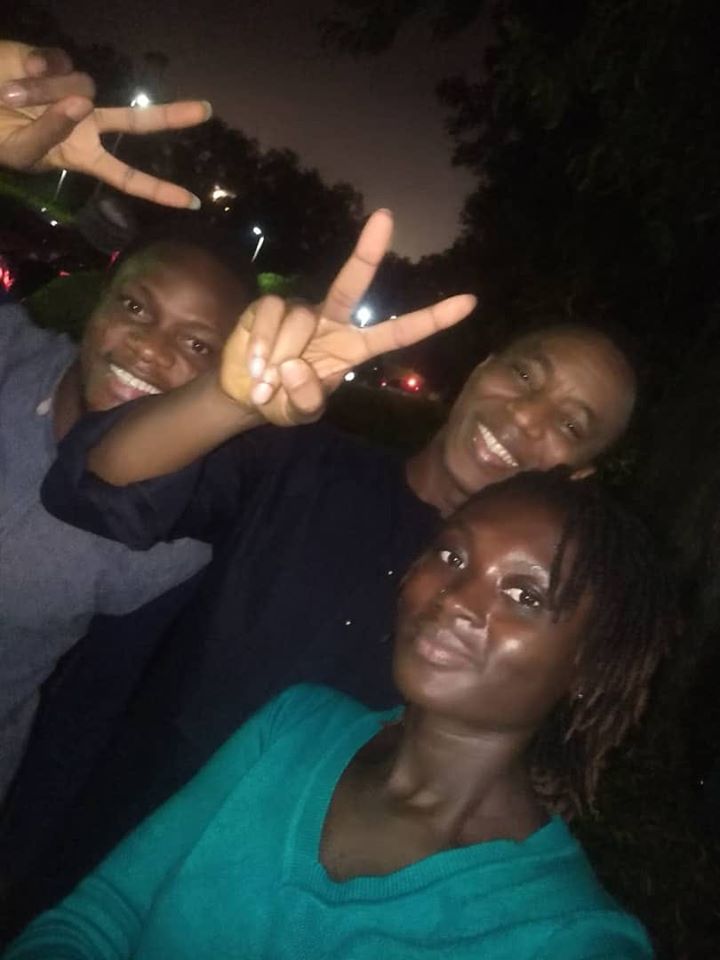 The Department of State Service has finally released SaharaReporters publisher, Omoyele Sowore, and his co-detainee, Adebayo Bakare following a court order.
They were freed hours after Justice Ijeoma Ojukwu of the Federal High Court in Abuja gave the DSS 24 hours ultimatum to release the two men.
Their lead defence counsel, Mr. Femi Falana (SAN), confirmed the news on Thursday.
He said they were released about 7pm on Thursday.
“They were released about 30 minutes ago. They were released to one of our lawyers,” he said.
He also told our correspondent that the agency had paid the sum of N100,000 awarded against it by Justice Ojukwu for making the court to adjourn till Friday for frivolous reasons on Thursday.
The two men who are now being prosecuted by the Federal Government on charges of treason were arrested in August this year over their call for ‘Revolution’ protest against bad governance.
But the DSS continued to hold them in custody despite separate court orders for their release.
It came to a head on Thursday when the judge, who frowned at the conduct of the DSS, issued a fresh order directing the agency to release them within 24 hours.
Justice Ijeoma Ojukwu while giving the order, noted that after she had signed the warrants for the release of the defendants from custody, and same were served on the defendants, the DSS had no justifiable reason to continue to hold Sowore and Bakare in custody.
The prosecuting counsel, Hassan Liman (SAN), on Wednesday insisted that the DSS had not disobeyed the court order for the defendants’ release, saying it was the detainees’ sureties for the bail granted the defendants by the court that had failed to approach the DSS to receive them from custody.
But the judge held that such requirement was not part of her order granting bail to the defendants.
Justice Ijeoma Ojukwu said she, with the Deputy Chief Registrar of the Court and the Chief Bailiff had reviewed the documents presented by the defendants and found them credible before signing their release warrants.
Earlier, the lead defence counsel, Mr Femi Falana (SAN), had complained to the judge that the prosecution failed to serve him with the statement of the prosecution witnesses as ordered by the judge on November 6.
Falana, who accused the prosecution of frustrating the trial, said he was only served with Video Compact Disc exhibits, on Wednesday, almost one month after the court ordered them to do so.
The lead prosecuting counsel, who took responsibility for the late filing and service of the additional proof of evidence with the VCD on the defendants, however, maintained that section 379(1)(a)(iii) of the Administration of Criminal Justice Act, 2015, only required him to file and serve the summary of the statements of the prosecution witnesses on the defence and not the full statements.
But the judge ruled that the proviso in the section of ACJA cited by Hassan required the prosecution to serve every available material or document requested by the defendants on them.
She ruled that the prosecution owed the defence, as the court had ordered on November 6, to serve the full statements of the proposed prosecution witnesses on the defendants.
She noted that the failure of the prosecution to serve all the necessary documents on the defendants as ordered by the court on November 6, had foisted the need to adjourn the matter on the court.
She then awarded the cost of N100,000 against the prosecution which must be paid to the defendants before the next hearing scheduled to hold on Friday (today).
She then adjourned till Friday “for report of compliance” with her orders.
Half-nude women from Sowore’s town protest in court
Meanwhile, a group of half-naked women from the birthplace of Sowore, in Kiribo, Ese-Odo Local Government Area of Ondo State, on Thursday stormed the Federal High Court in Abuja to protest the continued illegal detention of their son by the DSS.
Most of the women numbering about 30 were decked in white wrappers and bra but with no clothes covering  the rest of the upper parts of their bodies.
The protesting women who arrived the court environment after the proceedings started on Thursday, were not allowed entry into the court premises.
But they stayed by the gate brandishing their placards with various inscriptions calling for Sowore’s release and only departed long after the proceedings had ended and Sowore with his co-detainee returned to custody by the DSS operatives.
In their Apoi dialect the women, many of them with grey hair, they described themselves as beneficiaries of Sowore philanthropic gestures and appealed to President Muhammadu Buhari to release him from custody.
Top Stories