A Nigerian woman who has been suffering from the Vesico Vaginal Fistula disease has told her story. 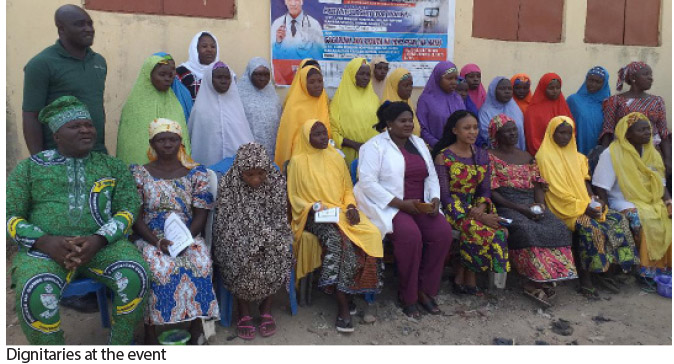 As the age-long problem of Vesico Vaginal Fistula (VVF) continues to ravage women in northern Nigeria, a patient who was has been suffering from the disease in the past 15 years, Habiba Shu’aibu, has lamented her woes. From Landan-mai-Dorawa, Gombe Local Government, Gombe State, she narrated her ordeal to Daily Sun in her theatre bed:

“I saw a woman with her six to seven children in my sleep. She sat on my head while her children held my legs and hands. She asked me ‘your life or that of your child?’ I accepted to offer none of them. She, then, ordered me to ‘wake up and live your life in water.’

«To my surprise, I woke up soaked in urine. I called on my husband immediately, who rushed in and prayed for me. After then, I was taken to hospital, where I was delivered of the baby. But we lost the baby.”

She explained why was in labour for seven days, in spite of the presence of a nearby health facility: “I did not deliver my babies in hospital. We hoped this one would be like the previous deliveries that went without issues.” She had undergone surgery to fix her problem, however, “it was successful but did not last long.”

Habiba was one of the 30 VVF victims who benefited from the one-week free surgery conducted by Evangel VVF Centre, Gombe. The mother of four, who was full of joy after her surgery, was optimistic that this second surgery could end her 15-year travail:

“This problem has, over the years, separated me from my loved ones, including my sisters. Even my children were stigmatised by their friends and the members of the community. In fact, they were isolated from other children. Nobody was ready to accept anything from me, except my dear husband who has been standing by me till this moment.

“I just pray that this change I am feeling in my body will be the end of my misery and the beginning of a new dawn for me because it has not been easy for me. At some point, I even thought of killing myself because of the way my children were being treated in our community.”

However, Habiba was worried on how to meet the conditions given by the doctor for her problem to completely heal: “I was warned to stay away from any sexual activity, carrying heavy and domestic works for the next six months. I am worried because that might cause my husband to pick another wife.”

Project Director, Evangel Centre, Dr Sunday Lengmang, said Habiba’s case was almost the same as those of most VVF victims: “Whenever we are out for such outreach, we come across such stories which spur us to do more. Most patients who come for free surgery and treatment of the ailment are mostly young women who got married at very early age.

“We will conduct free VVF surgery for another 30 women before the end of the year. The outreach also involves training of different healthcare providers who will be working in the rural areas and communities to help in identifying and managing the problem of obstetric fistula.”

He called on government to initiate “a rapid intervention programme to strengthen the status of sexual and reproductive healthcare. There is the need for government to establish functional VVF centres to treat fistula and help VVF patients and provide free Caesarean Section (CS) for women who have had successful VVF repair.

“If women had successful VVF repair and they go to deliver normally soon after the surgery, then they are likely to have the recurrence of the VVF again. Government should step in for those women and make sure they have everything they need for free CS, it will go a long way in preventing VVF.”

Executive Secretary, Gombe State Primary Health Care Development Agency (GSPHCDA), Dr Abdulrahaman Shuaibu, said government is looking at investing in the area prevention of the problem in the state. After leading a delegation to St Luke’s Mission Hospital, site of the free surgery in Gombe metropolis, he enjoined the centre to do more in the area of training of health care provider “so as to have more capable hands that will assist in addressing the problem.”