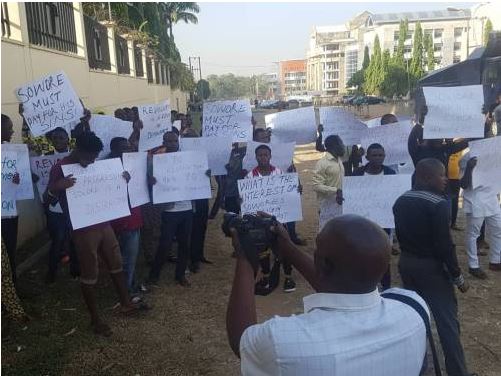 The protesters at the court

A group of rented thugs on Friday morning stormed the Federal High Court in Abuja ahead of the trial of pro-democracy campaigner and Publisher of SahareReporters, Omoyele Sowore, condemning his release by the Department of State Services.

Sowore, arrested on August 3, 2019 by the DSS for calling on Nigerians to demand a better country from the administration of President Muhammadu Buhari through peaceful demonstrations, was on Thursday released by the secret police after 125 days in detention despite two court orders directing his release after meeting stringent bail conditions in that period.

According to them, the DSS shouldn't had released Sowore because he had to pay for what they described as 'sins'.

The hired thugs also tried to intimidate Sowore's supporters, who were also in court to show solidarity with the popular activist.

At time of this report, anti-riot policemen had asked the two groups to move away from the court premises.

The trial of the 48-year-old has since commenced at the court.