The suspect claimed the daughter had become wayward and refused to go to school, adding that his action was to tame her. 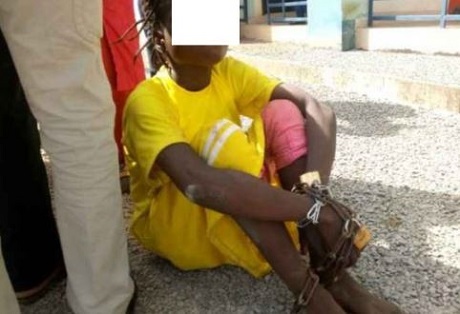 The Nasarawa State Command of the Nigeria Security and Civil Defence Corps has apprehended a 56-year-old man, Dahiru Inusa, for allegedly chaining and dragging his 15- years-old daughter on the street in Lafia, the state capital.

Parading the suspect at the headquarters of the NSCDC on Friday, the corps commandant, Mr Muhammad Mahmoud-Fari, said the suspect was arrested on Wednesday at Bukan-Sidi area of Lafia.

The NSCDC boss explained that the suspect claimed the daughter had become wayward and refused to go to school, adding that his action was to tame her.

He, however, expressed worry over the high rate of child abuse across the 13 local government areas and 18 local council development areas of the state, calling for concerted effort from all stakeholders to stem the tide.

He said, “This is a case of a father chaining and dragging his biological daughter on the street in the name of instilling discipline in her. We all must join hands to fight this menace in our society.

“Just yesterday (Thursday), we had the case of a 75- year-old man who defiled a three-year-old child.”

The commandant added that the command would charge the suspect with attempted murder and child abuse.

The suspect, in an interview with City Round shortly after he was paraded, expressed remorse over his action, saying that it was the handiwork of the devil.

The father of 15 children stated that he loved his daughter dearly and wanted the best for her.

He said, “I was angered by the fact that some girls were influencing her negatively and it was the anger that pushed me into making the mistake of putting her in chains. I was only trying to make her take me to her friends and not to harm her. I am begging my daughter and the government to forgive me.”