Herdsman Kills Farmer For Shooting Catapult At Him


The police report revealed the farmer was also with a cutlass and the duo got engaged in a cutlass fight. 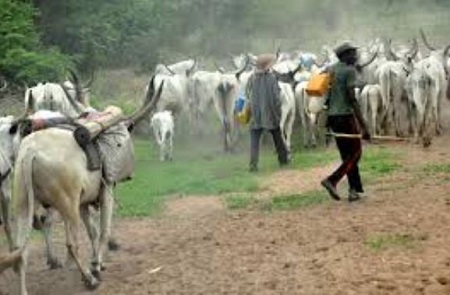 A farmer in Ogun State has been killed after attacking a herdsman who was grazing cattle on his newly cleared land.

Segun Akinlade, the farmer according to report is a 35-year-old man who visited his farm and was infuriated when he saw a herdsman, Muhammad Garba, with cattle on the farmland.

To scare him off, he allegedly attacked the herdsman with a catapult but the action did not go well with the herdsman who retaliated by approaching the farmer with a cutlass.

The police report revealed the farmer was also with a cutlass and the duo got engaged in a cutlass fight, but the herdsman seems to be better in such duel than the farmer who was found dead.

CSP Mobolaji Jimoh, the PPRO of the Imala Police Division, Abeokuta-North Local Government Area of Ogun State, said that the police responded when contacted by mobilising men to the scene of the incident.

“On getting to the scene, the deceased’s corpse was met on the ground while the suspect also had machete cuts on his body. The suspect was identified and promptly arrested,” CSP Mobolaji Jimoh.

“The two of them used cutlass to attack each other, resulting in the death of the deceased. The corpse has been deposited at the mortuary for autopsy.”

The police said the herdsman has been arrested and will be transferred to the homicide section of the state Criminal Investigation and Intelligence Department for further interrogation and investigation of the event.