Men accused of burning PDP women leader in Kogi state have been paraded by the police. 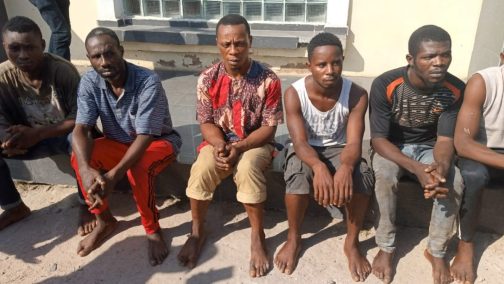 Suspected killers of Kogi PDP women leader
The Kogi State Police Command has finally paraded six suspects allegedly behind the killing of PDP Women Leader, Mrs. Salome Abuh after much public outcry for justice.
On November 18th, Mrs. Abuh was burnt alive in her house at Ochadamu Kogi State shortly after the announcement of the results of the governorship election held in the state on November 16.
The six suspects are Ocholi Edicha, Adamu Haruna, Onu Egbunu, Musa Alidu, Attai Haruna and Attah Ejeh.
Parading the suspects, the Kogi State Commissioner of Police, Hakeem Busari said Edicha aged 30 confessed that he led the gang that burnt the house of Elder Simon Abuh which led to the death of his wife, Mrs. Salome Abuh.
“The suspects further confessed that they were responsible for the series of armed robbery incidents in Ochadamu and its environs,” he added.
Busari while calling for calm, assured that all perpetrators of the act will not go unpunished as efforts are still ongoing to get other members of the gang.
During interrogation by journalists, the leader of the gang, Ocholi Edicha said they had issues with the woman before election day. While admitting that he is a staunch supporter of the ruling party, the prime suspect, however, distanced himself from the killing of the PDP women leader.
Meanwhile, the five other suspects paraded by the command exonerated themselves from the killing. According to them, they were petty thieves who are known for robbing the neighborhood of their belongings.
This was also confirmed by the prime suspects Edicha, who said: ” I don’t know these people they are parading”.
Kogi State Commissioner of Police, Hakeem Busari while parading the Edicha expained that he was arrested with the help of local vigilantes on 21st November along with five others during an armed robbery operation in the area. Other suspects paraded along with Ocholi were Adamu Haruna, On Egbunu, Musa Alidu, Attai Haruna Egwu and Attach Ejeh.
Busari told journalists that Edicha led the gang that burnt the house in which Mrs Abuh was sleeping. “The suspect further confessed that they were responsible for the series of armed robbery incidents at Ochadamu and it’s environs.” The commissioner said adding that a gun was recovered from the suspects.
During an interview, Edicha denied the allegation of leading the arsonists that killed Mrs Abuh. He said although he is an APC member and that he had misunderstanding with Mrs Abuh on election date, he did not participate in her killing.
Ocholi who spoke in Igala language further alleged that some of the people that burnt the house came from Ejule. 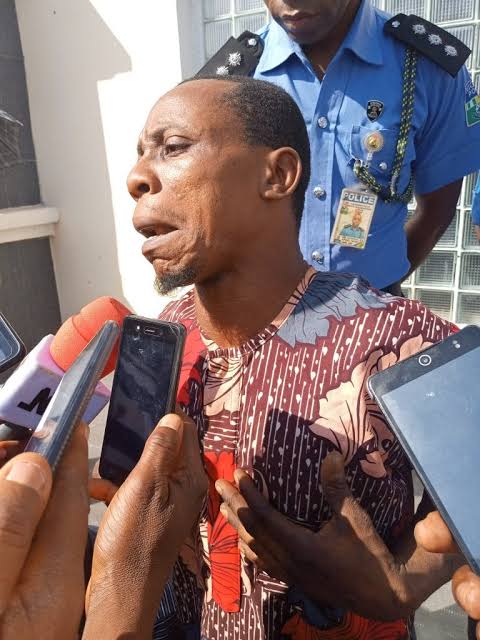