Juventus superstar, Cristiano Ronaldo has been startled by a pitch invader who grabbed him by the neck. 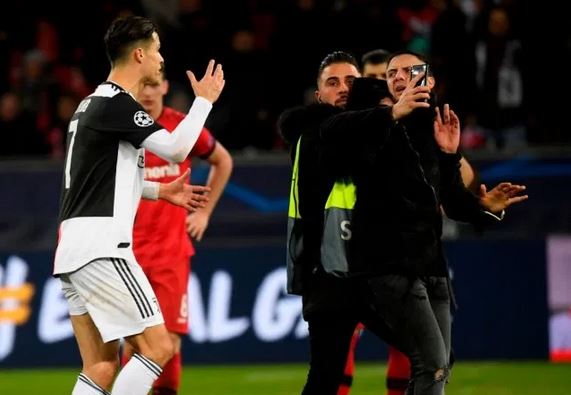 Cristiano Ronaldo was left fuming when a pitch invader grabbed him by the neck after Juventus’ final Champions League group game. Juventus beat Bayer Leverkusen 2-0 on Wednesday night, with Ronaldo on the scoresheet against the German side.

Players were offering their congratulations and commiserations to each other at full-time when a fan stormed the pitch.

The pitch invader made a beeline for Ronaldo and reached the striker, who was facing the opposite direction and did not see the fan approaching.

Ronaldo is usually sympathetic with pitch invaders, but the forward was furious when the fan grabbed him by the neck.

‘Are you crazy?’ Ronaldo appears to shout at the fan as he is taken away by stewards.

The supporter has his phone with him, obviously hoping he could get a selfie with Ronaldo, but the 34-year-old was clearly not impressed with the fan’s behaviour.

More than once the game at Leverkusen was interrupted by pitch invaders. Another Juventus supporter ran onto the pitch in the closing stages of the match and Ronaldo was once again the target.

The fan, however, just wanted to hug Ronaldo, who was visibly bemused by the interaction.

Juventus had already qualified for the knockout stages before the clash against Leverkusen and the victory confirmed the Italians as Group D winners.