A zookeeper has been seriously attacked by a lion in broad daylight, sparking serious panic among onlookers. 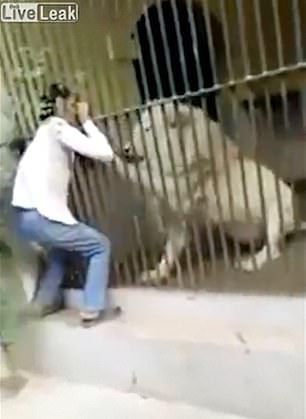 A zookeeper was attacked by a lion through the bars of its enclosure during feeding time at a zoo in Pakistan as onlookers screamed in horror.

Kannu Piraditta was feeding the big cat raw meat at the Karachi Zoological Gardens in Karachi, Sindh, on Monday when the animal clamped its jaws around his arm.

Mr Piraditta had been throwing meat to the white lion, who shared the enclosure with a lioness, when the animal attacked. 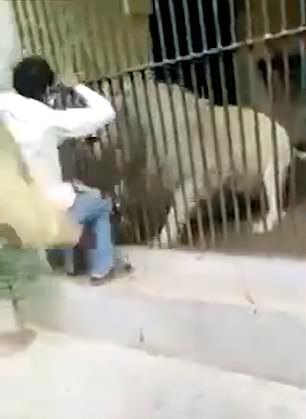 The zookeeper screamed in pain in front of horrified visitors to the park.

Other employees reportedly witnessed the terrifying moment but did not intervene to help their colleague.

The zookeeper battled to break free from the lion's grip for more than 40 seconds before the animal finally let go.

Mr Piraditta was left with a stream of blood pouring from his arm as bystanders screamed and shouted around him. 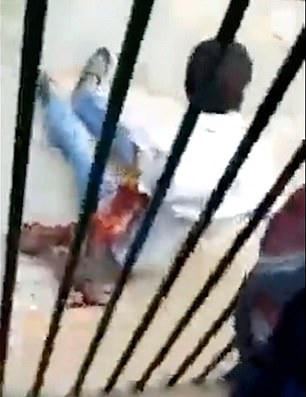 He had his arm ripped apart

He was rushed to the Civil Hospital Karachi where he is said to be in a stable condition.

'It's an unfortunate incident and we have all sympathy with the zookeeper. We are providing best possible treatment to him and hope that he would be back home in two to three days.'

Mr Ayub claimed that the zookeeper had violated the zoo's rules for feeding the lions and had approached the animals from the wrong end of the enclosure.