Three children have died a terrible death after allegedly suffocating inside a car. 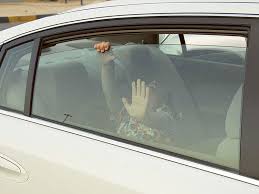 Suffocation (File photo)
Three children said to be four year olds have died in a broken-down car parked by the roadside on the Indian Ocean island of Mayotte, likely succumbing to dehydration in the scorching heat, the prosecutor’s office said Thursday.
According to a report by AFP, the children were playing in the street in the Combani commune of the small French territory when they disappeared on Wednesday morning.
Their parents alerted the police after looking for the children for several hours,  the three were found dead in a car.
They were locked in a car that had been parked by the roadside for several weeks, the prosecutor’s office said.
The car’s child lock mechanism had been activated, trapping the children inside. Tinted windows made them difficult to spot.
It has not been established how the children ended up in the car or what they died of, but investigators suspect dehydration may be to blame, with Mayotte experiencing higher-than-usual temperatures of around 35 degrees Celsius (95 Fahrenheit).
The prosecutor’s office has opened an investigation.
Top Stories