Joshua's Performance Against Ruiz 'Was A Joke'


England's Joshua rarely exchanged with Ruiz the huge underdog who knocked down Joshua four times on his way to scoring one of the biggest upsets in boxing history June 1 in New York. 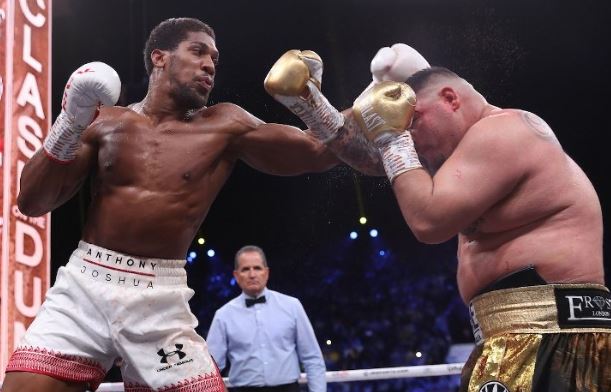 Anthony Joshua did what was necessary to win back his heavyweight titles.

That’s about the only positive thing Hall-of-Fame promoter Bob Arum could find to say about Joshua’s victory over Andy Ruiz Jr. In their immediate rematch Saturday night in Diriyah, Saudi Arabia. A safer, slimmer Joshua jabbed, moved and out-boxed Ruiz on his way to convincingly avenging his seventh-round, technical-knockout defeat in their first fight six months earlier at Madison Square Garden.

Joshua has drawn criticism for the cautious approach he took to their heavyweight championship rematch, even though he won by big margins on all three scorecards (119-109, 118-110, 118-110). Arum was among those that wasn’t especially impressed by the British superstar’s performance.

“I thought it was a joke,” Arum told BoxingScene.com prior to a press conference Wednesday at Madison Square Garden to promote the Terence Crawford- Egidijus Kavaliauskas card Saturday night. “He did what he had to do to win, but there are 15 heavyweights that you can think of who would’ve been in with Ruiz Saturday night and done the same thing.”

England’s Joshua (23-1, 21 KOs) rarely exchanged with Ruiz (33-2, 22 KOs), the huge underdog who knocked down Joshua four times on his way to scoring one of the biggest upsets in boxing history June 1 in New York. The 88-year-old Arum wasn’t particularly surprised Joshua competed cautiously throughout their second encounter, considering how imperative it was for the 2012 Olympic gold medalist merely to win back his IBF, IBO, WBA and WBO titles.

“He’s in there to win the fight, so he’s gonna do it the easiest way possible,” Arum said. “And the only way that he could possibly lose that fight is if he traded with Ruiz and got caught.”

Reclaiming his titles probably will lead the 30-year-old Joshua to facing Kubrat Pulev, an opponent Arum’s company co-promotes, in his next fight. Bulgaria’s Pulev (28-1, 14 KOs) is the mandatory challenger for Joshua’s IBF title.