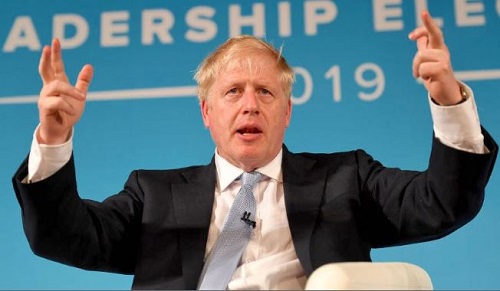 Boris Johnson has done it. The UK Prime Minister has stunned political pundits by leading his Conservative Party to score one of the country's most dramatic electoral victories in decades.

The result is a vindication of Johnson's strategy to campaign on a single promise to "get Brexit done."

It was a crushing defeat for the opposition Labour Party, whose leader, Jeremy Corbyn, said he would step down after a "process of reflection." And the leader of the pro-Remain Liberal Democrat party, Jo Swinson, lost her seat, as the Scottish National Party swept the board in Scotland.

By early Friday morning, the Conservatives had secured 363 of the 650 seats in the House of Parliament, well ahead of Labour's 203 seats.

The Liberal Democrats have 11 seats, while the Scottish National Party posted big gains in Scotland, with 48 seats.

That would give Johnson a comfortable majority in the House of Commons and paves the way for Brexit to take place at the end of January.

"We did it," Johnson said at a victory rally on Friday morning. "We broke the deadlock, we smashed the roadblock," he told a cheering room. "A new dawn rises on a new day."

"You may only have lent us your vote, you may not consider yourself a natural Tory, your hand may have quivered over the ballot paper as you put your cross in the Conservative box... If that is the case I am humbled," Johnson said.

"I, and we, will never take your support for granted," Johnson added.

He said earlier the result gave his party a brand new mandate to get Brexit done.