Some suspects have been arrested in connection with stealing of the church property during the violence that occurred. 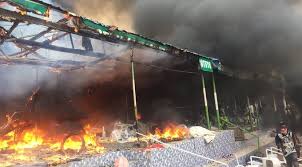 The Ondo State Police Command, on Thursday, said it had arrested no fewer than 10 persons for looting the property of a church, the Sotitobire Praising Chapel, in Akure, which was torched on Wednesday.

The police said the suspects were arrested in connection with stealing of the church property during the violence.

The church was burnt down by irate youths in the Oshinle area of Akure in protest against the disappearance of a one-year-old boy, Gold Kolawole, from the church during a Sunday service last month.

The youth were also aggrieved that the police were allegedly not giving the boy’s disappearance the attention it deserved.

Apart from the church, houses, vehicles and other properties belonging to the religious institution were also burnt by the protesters.

Three people lost their lives in the crisis, including a policeman, whose identity has yet to be revealed.

The Police Public Relations Officer in the state, Mr Femi Joseph, confirmed to PUNCH Metro on Thursday that 10 persons had been arrested in connection with the incident.

He said, “We have arrested 10 persons. While the violent crisis was going on, they were busy looting the property of the church. We even recovered some of the church’s property from them.

“Some of them were using vehicles to take the items away when we caught them. We will arrest more of those looters.”

Meanwhile, when our correspondent visited the scene of the violence, it was observed that normalcy had returned to the area, while some armed policemen were seen patrolling the streets and others were stationed in strategic locations.

Meanwhile, the founder of the Sotitobire Praising Chapel, Akure, Alfa Babatunde, has dragged the Department of State Services before the Federal High Court sitting in Akure over his arrest and detention by the security agency.

In a suit filed by his counsel, Mr Yemi Omoware, the pastor, who has been detained by the DSS for some days, sought the order of the court to effect his release.

The applicant said his arrest and detention by the DSS were an abuse of the legal process and violation of his fundamental right to freedom of movement.

The respondents in the suit are the DSS, the Director General of the DSS in Ondo State, Mr Emmanuel Anaobi, Mr Isaac Babalola and Mr Remi Oluwalogbon.

Babatunde’s lawyer is seeking an order “directing/compelling the release of the applicant unconditionally from the custody of the respondents.”

The suit is also seeking an order “enforcing the fundamental rights of the applicant to liberty and dignity of the human person, which rights were violated by the respondents.”

The applicant also sought an order restraining the respondents, their agents, servants, subordinates and or any person(s) taking instructions from them whatsoever/whosoever from engaging in any further acts of arrest, detention and violation of his right to liberty and or dignity of human person.

Babatunde is also seeking N100m as aggravated damages against the respondents jointly and severally for the violation of his fundamental human rights.

No date has, however, been fixed for the hearing.