A man has been struck by an unfortunate tragedy after he lost seven members of his family to a tragic fire incident. 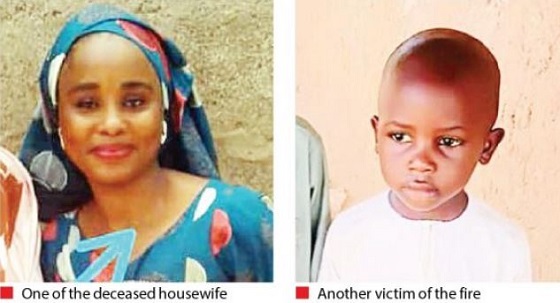 When Shuaibu Ahmad and his family visited his hometown, Danmusa, the headquarters of Danmusa Local Government Area in Katsina State for the wedding ceremony of a family member, little did he know that the joyous visit would turn to a sad one.

Ahmad went for the wedding along with his wife, Maryam Lawal (late), and two children, Abdurahman (four) and Mohammed (two).

After the wedding ceremony, Ahmad left his family in Danmusa to continue to enjoy the holidays and returned to Abuja. However, shortly after he left, a fire broke out in his house and its wake left seven people dead.

Ahmad recalled that on the fateful Saturday, he called his wife on phone 30 minutes to her unfortunate death and that they exchanged pleasantries and she assured him that they were all fine.

He said, “I hung up the phone and continued with my businesses. However, I began to feel uneasy and decided to call her again. This time around her phone wasn’t connecting. I called her sister’s line and still the same thing; my uneasiness heightened.

“I later receive a phone call from my uncles asking me to return home. I then called one of my cousins and he asked me if I had spoken to my wife, I told him I had, but the tone of his voice was different.”

“My cousin then said there was a fire incident in my house. I began to shake and shiver, I couldn’t drive and had to get a friend who drove us to Danmusa.

“I got home and found that my wife, Maryam Lawal (27), her sister, Ummi, and five others had died from a fire that engulfed my residence at Unguwar Kukoki in Danmusa Town.”

He further said, “Up till now I have not visited the house since the incident; I can’t stand it, seeing how a house full of life when I left has now become a home of death.

“My two children escaped because my brother took one, Abdurahman, to a nearby school for an interview because I wanted to engage him during the break. The younger one, Mohammed, was called by his grandmother to pass the night there wither at her place.”

Many have attributed the fire to a gas explosion, but Ahmad said, “It is not true, I don’t use gas in my house; it is firewood, and we only use stove as a second option. No one can tell you what caused the fire. I have left everything as the will of God Almighty.”

Daily Trust Saturday reports that the fire which cause is yet to be ascertained started at about 03:00pm when the late Maryam was hosting her close friend and neighbour and a pregnant mother, Jamila, and her two children, Zainab (14) and Usman (three). They all died in the fire. Another four-year-old boy and niece to Ahmad, Gidado, also died in the fire.

One of Ahmad’s neighbours and late Jamila’s husband, Malam Samaila Ayya, recalled that Maryam visited his wife and asked her to come along and help her prepare tiger nuts drink.

Malam Ayya said, “They finished up and moved to Maryam’s house along with her children; that was the last I set my eyes on my wife and children.

“Maryam and Jamila had been the best of friends since their childhood; they were fond of each other; and they died together. No one can challenge what God has destined.”

One Mohammed who helped in the rescue effort said, “Smoke covered everywhere, we could only hear them shouting and crying for help.

“We broken down the wall and reached the room where Maryam and the rest moved to, we tried to break down the window to no avail, she pushed her hand through the burglary for help, we were pulling as others tried to breakdown the main entrance. It was late when we eventually got to them, they had all died. It was Usman’s body we first recognised from the rubble.”

Both Ahmad and Samaila said the circumstances and deaths of their wives and children were from God and only He knew what happened and ordained how it would happen. They both prayed for the repose of their souls.