Boko Haram: Amnesty International Reacts To Execution Of CAN Chairman

Tension Rises In Cross River Ahead Of Rerun Election

Photo Of Kidnappers Caught With Military Camouflage Uniforms In Kaduna

'We Are Afraid Of Operation Amotekun' - Miyetti Allah Confesses


There has been a running battle among the chieftains of the APC on how to remove the National Chairman. 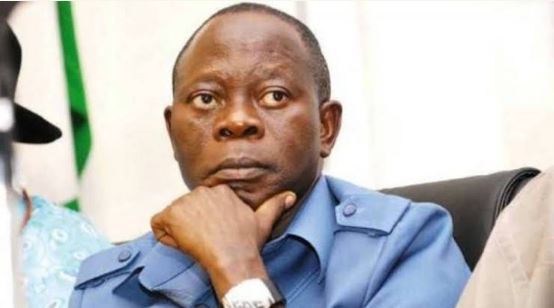 The inability of the “Oshiomhole must go” governors to have consensus has stalled the removal of the All Progressives Congress (APC) National Chairman, Comrade Adams Oshiomhole from office.

There has been a running battle among the chieftains of the APC on how to remove the National Chairman. While some governors and party leaders believe that the party’s National Chairman should resign, other governors and some state party chairmen are of the opinion that he has done nothing wrong to warrant his resignation.

According to the Chairman of the Forum of the APC State Chairmen, Hon. Ali Bukar Dalori, 25-state APC Chairmen are behind the party’s National Chairman. For him, and his members, Oshiomhole has not committed any offense that would warrant his removal.

Also a Senator from Kano State, who spoke on the condition of anonymity, said his state governor, Alhaji Abubakar Ganduje would not join the governors calling for the removal of Oshiomhole from office.

The Senator said if he has the opportunity to speak with President Muhammadu Buhari on the issue, he would insist that Buhari should not concede to the removal of the National Chairman. According to him, the APC National Chairman saved the party from embarrassment it would have suffered in the hands of the leadership of the 8th National Assembly.

The Senator alleged that the 8th Assembly leaders wanted to make laws that would have been against APC’s victory but for the intervention of Oshiom hole who called the APC lawmakers together and told them what to do.

However, another party chieftain, who also spoke on the condition of anonymity, said it is all about what happened during the party’s primaries According to him, those governors and other party members who feel that they were helped by Oshiomhole are the ones behind him, while those who suffered casualties one way or the other in the hands of the National Chairman are the ones calling for his removal.

The party chieftain cited instances like Borno, Kano, Yobe, Kogi and some other states as states that Oshiomhole supported and gave them easily the mode of primaries that they wanted.

Also, in the present leadership of the National Assembly, Oshiomhole played a major role to bring it into existence and they are paying him back by standing against his removal.

The source stated that this is evident, as the APC National Chairman has made the Senate President, Ahmed Lawal the Chairman of the party’s National Reconciliation Committee.

According to the National Publicity Secretary, Mallam Lanre Issa-Onilu, the Committee is empowered to address grievances of party members and resolve existing conflicts, all with a view to “fostering unity and oneness within the party.” However, some party members have punctured the leadership and composition of the committee, stating that they are all supporters and loyal members of the APC National Chairman. Stressing this, the Edo State factional APC, led by Hon. Anslem Ojezua, has rejected the leadership of the committee.

The argument in some APC quarters is that every interest would have been accommodated in the National Reconciliation committee.

For instance the Progressive Governors’ Forum, the Forum of the APC State Chairmen, the non NWC National Executive Committee (NEC) and other organ of the party would have been asked to nominate representatives. According to those that have expressed their reservations on the Committee, such inclusiveness would help a true reconciliation.

The anti-Oshiomhole governors are said to have gone back to the trenches to see how to gather consensus to remove the chairman since they were said to have failed in the last meeting with President.

Some states’ chairmen and non NWC-NEC members were the first to openly demand for the resignation of the National Chairman after the NEC meeting that held in October.

A National Working Committee member, however, said that the governors would have to wait till another NEC for them to gather the consensus to remove the National Chairman. He, however, could not say when the party would likely hold its next NEC.

It took the party eight months to hold the last NEC, which some party members are counting as an offence against Oshiomhole.