Similarly, the federal government backed committee led by General Abdulsalmi was also working in another direction to resolve the dispute. 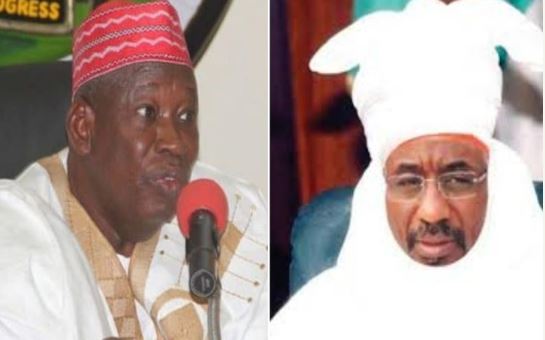 Despite intervention on the protracted feud between Abdullahi Umar Ganduje, governor of Kano State, and Muhammad Sanusi II, the emir of Kano by two former military Heads of states, General Yakubu Gowon (RTD) and General Abdulsalam Abubakar ( RTD), Ganduje is set to travel to Saudi Arabia on Monday evening to celebrate his 70 years in the Holy city of Islam.

A source close to the development told Daily Independent that the two heads of military junta had contacted Ganduje through the Chairman Nigeria Govenrors Forum, Ekiti state Governor Kayode Fayemi.

The source further revealed that Ganduje told Fayemi that he has concluded plans to visit the republic of Saudi Arabia to perform lesser hajj, stating that he won’t be available until January, 2020.

According to the source the duo of Gowon and Abdulsalam had insisted on meeting the Governor in Kano instead of Abuja where the Governor was when he was contacted.

Similarly, the federal government backed committee led by General Abdulsalmi was also working in another direction to resolve the dispute.

A statement sighted by this tabloid signed by Adamu Fika Wazirin Fika, disclosed that “against the background of the crisis in Kano, a matter that has since degenerated into serious tension within the State, with likely consequences on peace and security with the possibility of spilling into neighbouring states, a group of elders, under the chairmanship of General Andulsalami Abubakar.”

Although Fika failed to mentioned General Gowon among the committee members but Daily Independent learnt he was among the leaders working assiduously to achieve the reconciliation.

The statement added that “two State Governors are also members of the committee. These are Gov. Kayode Fayemi (who is also the chairman of the Nigerian Governors’ Forum) and Gov. Aminu Bello Masari of Katsina State.”

Fika hinted that the committee is working with the full understanding and cooperation of the Federal Government and initial contact has been made with His Excellency the Governor of Kano, Dr. Abdullahi Umar Ganduje, as well as with His Highness the Emir of Kano, Sarki Muhammadu Sanusi II.

According to Fika, the feuding personalities “have each confirmed to holdback from taking any further actions until the committee has fully undertaken and finalised this exercise of reconciliation and resolution.

He added “similarly, they each has respectively undertaken to call on all their supporters and sympathisers including social media operators to refrain from making statements, declarations, songs, articles, blogs and all actions inimical to the spirit and process of good governance, order and reconciliation. We call on everyone to hearken to the call of their principals.”