A man has given hope to people struggling out there after he recently received an award from Queen Elizabeth. 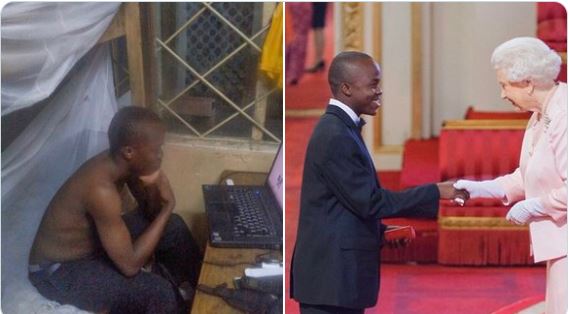 Given Edward started life struggling in his room before meeting Queen Elizabeth
A Tanzania man who started the decade struggling in his room has now ended it on a high note by being recognized by Queen Elizabeth of Great Britian.
Given Edward, took to his social media page to share photos of how his decade started and how it ended.
Though his beginning was humble, he ended this decade by receiving an award from Her Majesty the Queen for innovation and impact.
Given is the founder/CEO of Mtabe is a Tanzanian based tech company using artificial intelligence and SMS technology to deliver learning content to students in
Tanzania who cannot afford textbooks and have no Internet access. It is so simple that an average African student needs no new device to get started.
Given is also the founder of a similar App MyElimu, an Edtech discussion forum that allows peer learning and also allows Tanzanian Secondary School Students to discuss school activities.
See his tweet below:

Beginning of the End of the
decade decade 🙏🏽 pic.twitter.com/Y0rt32D2nJ