Zlatan Ibrahimovic has signed for AC Milan in a surprise return move to the Italian giants. 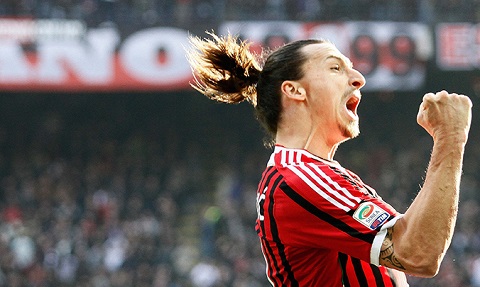 Zlatan Ibrahimovic
AC Milan have signed Swedish striker Zlatan Ibrahimovic on a free transfer until the end of the season with an option for a further year, the Serie A club announced on Friday.
Ibrahimovic, 38, returns to Milan where he helped the club win their last league title in 2010-11 and scored 56 goals in 85 games in two seasons.
“AC Milan is delighted to announce the signing of Zlatan Ibrahimovic. The club and the striker have agreed on a deal until the end of the current season with an option to extend the contract for the next one,” the club said in a statement.
Ibrahimovic last played for Major League Soccer side Los Angeles Galaxy, where he was the highest-paid player in the league and tallied 52 goals and 17 assists in two seasons before bidding adieu to the United States.
“I’m coming back to a club I hugely respect and to the city of Milan I love. I’ll fight together with my teammates to change the course of this season. I will do everything to make it happen,” said Ibrahimovic, who has scored over 500 goals for club and country.
The former Sweden international has had a storied career in Europe, playing for top clubs such as Ajax, Juventus, Inter Milan, Barcelona, Paris St Germain and Manchester United, winning numerous trophies in five different countries.
At Milan, he finished the 2011-12 campaign as Serie A top scorer before moving to PSG, where he topped Ligue 1’s goal charts twice in four trophy-laden seasons.
In November, he became part-owner of Stockholm club Hammarby - a decision that did not sit well with fans in his hometown Malmo, who reacted by vandalising a statue of the striker outside Malmo Stadium and branding him “Judas”.
-Reuters
Top Stories