A Suitor Once Threatened To Commit Suicide If I Didn't Marry Him - Gospel Artist, Bola Are Reveals


Nigerian gospel singer, Bola Are has told of how a suitor once threatened to commit suicide if she refused to marry him. 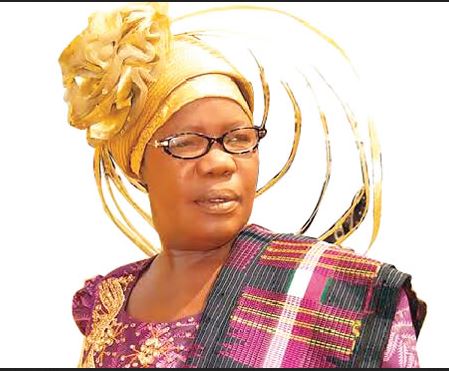 Veteran gospel singer, Dr Bola Are, speaks with MOBOLA SADIQ on her career and other issues

Does being a gospel singer make you an evangelist or pastor?

Some people think that is but being a gospel artiste is not a criterion for anybody to say he or she is an evangelist or pastor. You must be ordained by somebody before you can call yourself an evangelist. For me as the head of singers in the Christ Apostolic Church and also a former general evangelist of the mission, Pa David Babajide, anointed me 11 times before he died. Pastors Samson Akande alias Baba Abiye and Obadare prayed for me and anointed me several times too. Giving oneself that name (pastor or evangelist) can be likened to one crowning oneself as king. One must be ordained, trained and anointed before being given these titles.

Is being a gospel artiste a calling?

Yes, you must be called to be a gospel artiste. If you are not called and you call yourself, you wouldn’t last. Singing is the only thing that one cannot learn. If God didn’t give you the gift and you force yourself to sing, it wouldn’t work.

You were brought up by four top prophets in Christ Apostolic Church– Apostle Ayodele Babalola, Prophet Babajide, Prophet Akande and Prophet T.O. Obadare. Did that contribute to your success story?

I was the first fruit of my parents and I was ‘donated’ to the late Apostle Babalola. I grew up in the Mission House. But when Babalola died, I was taken to Pastors Abiye and Obadare.  I grew up with them and that’s why I mention their names a lot. Their prayers are working in my life till now and they will continue working till the end of my life. I claim 120 years for myself. I want to go home (heaven) and sing with the 24 elders; before then, I’m going nowhere. This is part of why I’m successful in singing and praying. My parents told me that I started singing when I was one-year-old and I believe them because my grandchildren are also singing at that same age. Singing and dancing are hereditary gifts from my grandfather who was a hunter.

As a young lady who started gospel music early, did you get enough publicity?

Three years before I was born, it was prophesied that my parents would have a child that would work for the Lord. However, it was not specified that I would sing. So, when I was supposed to talk, I was singing instead. It is God that publicised me. I go all over the world singing.

People think that gospel artistes are boring and strict. Is that really so?

Those who say gospel music is boring are not Christians. Gospel music gives one joy, peace, and everything good. If you see people going to secular music programmes, watch them; they are just looking for money and once they don’t get money from gospel music, they would opt for secular music. I cannot run from gospel music; I have no other place to go.  Most of those that used to be gospel singers and turned to secular music fade easily. What fame has God not given me since 1973? I have 87 albums out already and two are pending. If it is real gospel music, it cannot be boring. When you are singing out of Jesus Christ, you are singing nonsense. We are not strict at all.

A lot of gospel singers have spiritual fathers that they acknowledge in their songs. Do you think that is right?

You’re referring to me on this one. Personally, I acknowledge all my parents in faith. I always mention the God of my spiritual fathers (Babalola, Abiye, Obadare.) In fact, if nobody else does, I would do that and continue to do it. I cannot but acknowledge them because they have prayed for me. God would not come down from heaven; He would send somebody to one. All those great men of God monitored me and prayed for me. Prophet Abiye did two weddings for me. The first one was at a CAC church in Ede, because God said I should not do a noisy wedding. That day, 39 members of the top hierarchy of CAC attended my wedding and none of them knew what they were coming to do in Ede. When I asked him (Prophet Abiye) the reason for that, he said all of them would be witnesses to the wedding. My second wedding was a month later.  It was held on a prayer mountain. Prophet Abiye hosted the wedding there because he didn’t want people to think I got pregnant before marriage. Note that I didn’t get married to two men; it was the same man. Mentioning their (prophets) names is a way of cherishing them and thanking God for their lives. I feel it is right to acknowledge one’s spiritual fathers. If I mention the God of Abraham, Isaac and Jacob, who I didn’t see, I need to also mention the names of the ones I know. I‘m not eulogising them or worshipping their names, I’m just praising their God who Has done wonders through them.

It is Jesus Christ. I like dancing to gospel songs. What keeps me going is (the thought of) facing God, and doing His work. When my husband died about 25 years ago, I promised God that I would remain Bola Are and not remarry. When I was working at the University College Hospital, Ibadan, in 1979, God gave me 30 days to resign and work for Him. Since then, I have never lacked for a single day. When I’m singing, I feel on top of the world because that’s what I was created for.

Do you think it is right to bring comedians to church?

That is what we call modern Christianity. If you bring comedians to the church and they crack jokes against Christianity, that is wrong in my own opinion. If you must bring any comedian, whatever the person says must be from the Bible. Anything outside that, then the comedian should not be on the pulpit. If the person is a secular comedian, he or she should not come to the pulpit at all.

What comes to your mind when you see gospel singers ministering in fashionable clothing and jewellery?

As for me, I don’t wear jewellery. I like to be natural at all times, so I don’t adorn myself with them at all. However, dressing very well is part of our music but one shouldn’t just be too audacious or extravagant. People should not see one’s nakedness; it is bad if one dresses that way. I hear people classify some people as old-time (old school) but God is old-time too. It is important that we dress well but even if the clothes cost as much as N1m, it should be made decently.

Compared to when you started, what has changed about gospel music?

A lot of things have changed about gospel music of my time, compared to the present day. Some people just sing funny songs these days but some are actually singing well. It was not like this when we started in the 70s. These days, one wouldn’t even recognise some gospel singers when one meets them outside. When we started, a lot of us were not after the money. Sometimes, when we went to perform, we were given just food and drinks; no money. But these days, some are after money. However, some of these artistes really don’t have other means of livelihood except music. Music has changed. Sometimes, people even say that gospel singers are commercial but we have to pay the people going around with us and settle other logistics. These days, one has to take professional singers to the studio or the stage.

As a young woman, how did you handle the pressure of male admirers?

As a young lady, I didn’t look at men. Any man couldn’t even walk up to me and woo me anyhow. I wasn’t promiscuous. If I don’t know much about a place, you wouldn’t find me there. As a young lady, I was not someone men could toy with. Before I got married, a lot of suitors came. One even said he would commit suicide if I didn’t marry him. He tried to entice me with a brand new Volkswagen car. But, my spiritual father and I chased him after fervent prayers. We later discovered that the same man had impregnated another woman and was married to her.

I listen to music and I get inspiration from there. At times, I just keep quiet. I also travel out of the country whenever I want to relax. Nigeria is too stressful, so I always create time to rest abroad.

How do you keep fit?

I was a footballer in elementary and secondary school. I also used to run while in school. Dancing on stage is serious exercise. In fact, I consider that to be the greatest form of exercise. When you see me on the stage, I am not gentle. I am very active and agile on stage. At times, I also run to keep fit. When I’m outside the country, there are places that I run to and come back to my hotel.