The story has been told of a 46-year-old man who was brutally murdered by young robbers in Benin. 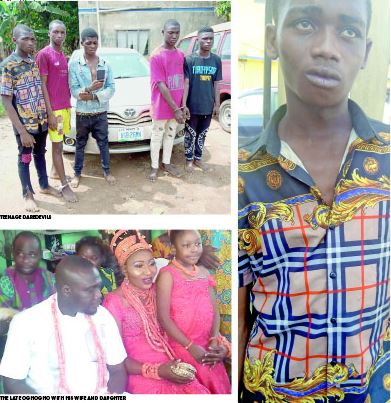 When 46-year-old Okunbor Oghogho found himself surrounded by five teenagers on the night of November 21, 2019, the worst he could think of was that he was about to be robbed of his valuables. On that score, he was correct, as they soon took his Samsung phone and the N5, 000 cash on him. However, he didn’t know how wrong he was.

By the time the night was over, the teenage gang had committed worse crime. They had kidnapped him, used his UBA ATM card to withdraw N215, 000 from his account and after noting a balance of N1.6m, decided to kill him. He was stabbed to death and his body disposed in the river at Upper Mission Extension axis of Benin City. They took his car with them.

This grave crime was committed under the cover of darkness and it remained a secret for a few days, as the police did not get wind of the crime until three days later when the victim’s wife reported her husband missing to the Anti-kidnapping Squad. Subsequent operation by the unit, led by Superintendent of Police Richard Balogun, culminated in the arrest of five suspects across different towns in Edo and Anambra states from November 26 to December 5.

Saturday Sun interviewed the alleged ring leader of the gang, Moses Joseph who claimed to be a native of Okene in Kogi State, but lived and worked as a driver in Benin City.

According to his confession, the gang of five, which had operated as armed robbers-cum-kidnappers, abducted the late Okunbor Oghogho at about 9 pm on November 21 at Iyaro Road.

“We deliberately hit his car (which is the method we used to kidnap victim) knowing that he would come down to check the extent of the damage on his car. Immediately he came out of his car, we grabbed him and threw him into the back seat and I took charge of the car. We relieved him of his phones and the N5, 000 cash in his pocket. We took his ATM card and drove him to First Bank PLC ATM Gallery at Sakponba Road, where we withdrew N215, 000 and confirmed the balance of N1.6million in his account.”

Thereafter, the gang took their hostage to Ikpoba River at Upper Mission Extension.

“Because he was struggling and arguing with us, I had to stab him severally at the back. We threw his body inside the river. I took his car, a Toyota Camry Saloon car (with number plate AGB26MN) to the house of one of our members, Marvelous, I gave him N2, 000 and his share of N54, 000.”

Joseph admitted he had been involved in several robberies and kidnappings in Benin City.

“I followed different groups for operations,” he said. “When members of the gang were killed in an operation, I joined another gang. I once escaped in Uromi with handcuffs during an encounter with SARS operatives.”

Suspects, Onyechika Emmanuel, who found using the victim’s Samsung phone and Chinedu Amah, who claimed he was studying Mechanical Engineering at Auchi Polytechnic both corroborated the story, admitting they each received a share of N54, 000.

The deceased’s wife, Odion Oghegho narrated how she had waited in vain for her husband to return home on that fateful day.

“I didn’t see him and his phone was switched off. After three days, I went to the Anti-kidnapping unit on November 24, to report that my husband was missing. Then few days later, I heard that five suspects had been arrested and I was shocked to hear they confessed to have killed him and thrown his body into the river.”

The distraught widow insisted on finding her husband’s corpse in order to give him a befitting burial. “I got married to my husband three years ago. I have only one child for him. God, why me? I have confidence and trust in God. God will surely fight for me,” she wailed.

According to Edo State Commissioner of Police, Mr. Lawan Tank Jimeta, Oghegho’s vehicle and phone had been recovered from his murderers. But the whereabouts of his corpse remained unresolved.

“When arrested, they took detectives to the river where they claimed they threw the body of the deceased. We didn’t see his corpse up till now,” he stated.

Police investigation is still ongoing to tie up the loose ends before charging the suspects to court.