The police intercepted the culprits on their way and after an exchange of gunfire with the fake military men while their accomplices escaped. 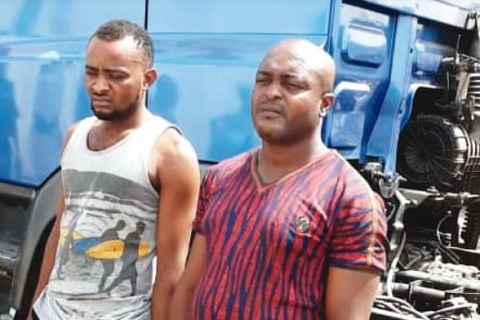 Men of the Lagos State Police Command have arrested two suspects, Charles Obllomo and Osita Onyeka, for allegedly conniving with four suspected fake military men to hijack a petrol-laden tanker around the Mile 2 area of the state.

PUNCH Metro gathered that the truck driver, Muhammadu Mande, and his motor boy, Lawali Usman, were conveying the product to Niger State when four men, who were dressed in military uniform, accosted them and ordered them to disembark from the vehicle.

Obllomo and Onyeka then took over the truck and were driving it to an unknown destination, while the four men in military uniform ordered Mande and Usman to enter a Toyota Corolla car, which followed the petrol-laden tanker closely.

The police, however, intercepted the culprits on their way and after an exchange of gunfire with the fake military men, Obllomo and Onyeka were arrested, while their accomplices escaped.

The state Police Public Relations Officer, Bala Elkana, said in a statement on Sunday that the tanker, with number plate Gage 743 XN, and the Toyota Corolla were also impounded, adding that the fake military men escaped with bullet wounds.

Elkana stated, “On Saturday, December 28, 2019, around 7pm, acting on the strength of information from a reliable source, police operatives from the Itire Division, led by the Divisional Police Officer, Barkfur Kromkyes, intercepted a DAF 85 tanker with number plate, Gage 743 XN, loaded with 40,000 litres of a petroleum product along the Iyana-Itire pindown point, Mile 2. The truck driver, Muhammadu Mande, 42, of Yauri in Kebbi State, and the motor boy, Lawali Usman, 34, of Minna in Niger State, were rescued unhurt.

“Two suspects, Charles Obllomo, 37, of No. 22 Bara Ayetoro Street, off Boundary Road, Apapa, and Osita Onyeka, 35, of Wasai area, Orile, were arrested. In his statement, the truck driver averred that his truck was loaded with 40, 000 litres of PMS at the Swift Depot, Apapa, was billed for Kontagora in Niger State. That on getting to a bad portion of the road at Mile 2, four men in military uniform stopped him and asked what product he was carrying before ordering him and his motor boy out of the truck and into a red Toyota Corolla.

“The two suspects in police custody, Charles Obllomo and Osita Onyeka, took over the tanker. The driver and his motor boy were sandwiched by the four men in military uniform in the Toyota Corolla. The truck was being driven behind the Toyota Corolla and heading for an unknown destination before it was intercepted by the police.

“According to the driver, he initially thought the hijackers were military men on stop and search duty until they started beating him and his motor boy and threatened to kill them if they refused to follow their orders.

“The two suspects were arrested in the truck and taken to the station. The four suspects in military uniforms escaped with bullet wounds after a fierce gun battle with the police. The truck and the Toyota Corolla were recovered and moved to the police station.”

Elkana stated that the PMS-laden tanker was handed over to the owner, Sani Samaila, the manager, Petroleum Nigeria Limited, Kontagora, Niger State, adding that the arrested suspects would be charged.

He said, “Two pairs of vehicle number plates and military caps were recovered from the Corolla car. The tanker containing the PMS was handed over to the owner, Sani Samaila, 55, the manager, Petroleum Nigeria Limited, Kontagora, Niger State. The owner of the tanker was full of gratitude to the Commissioner of Police, Lagos State Command, for coming to their rescue.

“He stated that tanker owners had suffered losses from the activities of tanker hijackers in the past without remedy, but since the arrival of the new commissioner of police and the deployment of police officers in vehicle and motorcycle patrols, such ugly incidents had reduced.

“Members of the syndicate usually hijack tankers, offload the content in locations mostly outside Lagos State and abandon the tankers for the owners to find them after some days or weeks. The Commissioner of Police, Lagos State, Hakeem Odumosu, directed the Commander, Special Anti-Robbery Squad to take over the investigation and ensure that the fleeing suspects are arrested. An investigation is ongoing; the two suspects will be charged.”