In a speech, Ihedioha described Amaechi as an icon, whose contributions to nation-building should not be ignored. 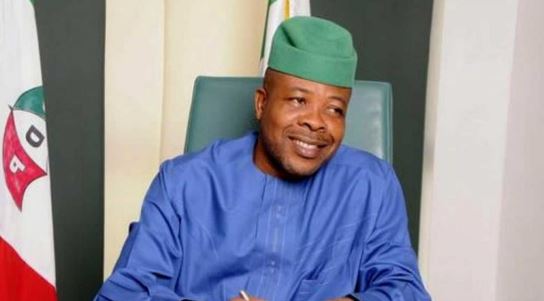 A statement issued in Owerri by Mr Chibuike Onyeukwu, the Chief Press Secretary to the governor, stated that Ihedioha announced the re-christening at an occasion to mark Amaechi’s 90th birthday in Owerri.

You would recall that the naming of the dual carriage way after the former South African president by former Gov. Rochas Okorocha attracted public opprobrium against the administration.

In a speech, Ihedioha described Amaechi as an icon, whose contributions to nation-building should not be ignored.

“Dr Amaechi is an icon, one of the founding fathers of the nation, whose contributions to nationhood should not be overlooked.’

“Amaechi remains an inspiration, who stood and defended those principles that remain valuable to nation building,” the statement further read.

Amaechi, a native of Ukpor in Nnewi South Local Government Area of Anambra, was a member of the House of Representatives in 1959.

The nonagenarian was later appointed the Minister of Aviation and Transport in 1962.

According to the statement, former President Olusegun Obasanjo was stated to have prayed God to grant the Imo governor the strength to live up to the expectations of the people of Imo.

Obasanjo was quoted to have said that with Ihedioha’s wealth of experience as a former Deputy Speaker of the House of Representatives, he was well equipped to govern the state successfully.

“I believe that God, who made you governor of Imo this time, will give you the knowledge to do what needs to be done for Imo to make it one of the leading states in the country.

“While congratulating you on your electoral victory, I pray the Almighty God to enable you to govern well.

“Having eminently served as Deputy Speaker, you are eminently qualified to make Imo State one of the best states.

“You have to bring to bear your wealth of knowledge and extensive contact to the service of Imo and South-East,” the statement added.

The statement also quoted the President-General of Ohaneze Ndigbo, Dr John Nwodo, to have said that Ihedioha portended “hope and a new beginning for the Igbo nation” with his quality leadership.

“We have a governor who is humble, experienced and not afraid to appoint people with more academic accomplishments than him or those who have more exposure in governance than him,” it quoted Nwodo to have also said.