A native doctor who made a fortune from praying for kidnappers has made a startling confession. 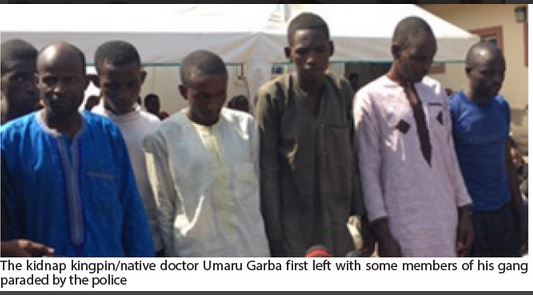 According to a report by Sun News, a soothsayer/native doctor who has been providing spiritual cover for armed robbers, kidnappers, bandits and other criminal groups said he has made millions of naira praying for these hoodlums.

The suspect, Umaru, 53, from Batagarawa Local Government Area of Kastina State, said he has been a soothsayer virtually all his life and providing services for people in need without making much gains.

However he said things turned around when he started rendering the same services for criminals as his pocket has never run dry from the first day he started as they would always come back to show appreciation.

Umaru, who was arrested by men of the IGP Intelligence Response Team, said he is aware of the businesses the armed robbers and kidnappers are into but that he has no choice but to back them with spiritual powers because they are good customers.

He confessed that he has criminal groups from virtually all parts of the North and the Middle Belt areas of the country who come to seek for his powers and that apart from praying for them, he fortifies them with different charms to make them invisible and difficult for security agencies to arrest them.

Apart from giving the kidnappers spiritual cover, members of the gang of nine, said that he is the one that dictates whatever amount to be collected as ransom. As if that is not enough, he has succeeded in luring most young men who come to consult him into kidnapping and other violent crimes.

The native doctor who said his last assignment was that of the kidnap of the traditional ruler of Rubochi, where he got N50,000 from the kidnap group who collected a whooping and took N6.5million from relatives of the royal father before he was released. He said he was cooling off with his loot when he was arrested by the police. He also confessed that he never had any inclination that the police were coming after him despite the spiritual powers that he possessed.

He spoke to Daily Sun:

“My name is Umaru, from Batagarawa Local Government Area  of Kastina State. I am 53, years old. I am the spiritual leader to so many kidnap and armed robbery gang. I usually pray for them for protection and power for them to succeed in all of their operations and when they succeed, they come and show appreciation with whatever they have.

“I have been doing this for more than 10 years now and I also give them medicine, charms and other things to guide them as they go. I have made so much money from this and I have never been broke since I started working for these group of people. I know they are criminals and I know everything that they do but you see they pay me so well that I just have to continue to work for them.

“I have backed them up with prayers and charms which worked for them until when the kidnap the chief of Rubochi that the police came after them and arrested all of us. The police first arrested them and they led them to my place that I am the one that usually back them up with spiritual powers.

“Before they planned the kidnap of the traditional ruler of Rubochi, they came to me as usual to hint me about the operation and asked me to pray for them to have good luck and I did. They told me they will ask for N5million ransom but I told that the amount was too small and they increased it to N6million and at the end of the day they told me they collected N6million and they shared it among themselves and kept the sum of N50,000, for me. I was enjoying myself with the money before I was rounded up by the police.

“I have spent six years with this particular group of people but I have other criminal groups that I provide diabolical services for. I pray for a lot of armed robbers and kidnappers to have successful operations and for police not to arrest them and the prayers have been working until this December.”

Another member of the gang, Bature, 31, told Daily Sun, that he actually got to know about the kidnap of the  Rubochi Chief from the native doctor who called to inform me and other of his colleagues. He said the nine members gang have seven AK 47, riffles and several rounds of ammunition which use in their operation.

On the day the traditional ruler was kidnapped, he said he did not follow them to the palace: “It was another group of people that went on that mission while me and my other colleagues mounted security for the it was when they succeeded that they called to inform us.

“We all have our different roles that we were assigned to do. People who went to the house were nine. Before this one, I have participated in four other kidnapping operation before I was arrested.

“All the kidnappings  I have taken part in took place in Nasarawa State. That  is where we are based and operate from. The first time we kidnapped two people along the Abuja/Jos Road and got N500,000, ransom the second we got N300,000, the third we collected N700,000,ransom and the fourth N500,000”

Another member of the gang Magaji, 40, told of how he has been in the kidnap operation for some years and making good money from it.

He said he was lured into joining the group by the spiritual leader of the gang. He said he had gone to the spiritualist for his personal problem at a village named Riba:

“After consulting with him, he asked me to pay N7,000, and gave me some inscription to drink. After that we became friends and before I knew what was happening, he introduced me to a kidnap gang and each time we kidnap anyone and we tell him this is how much we intends to collect from their  families, he would  tell us that amount too small that we should increase it. He is the one that usually tells us the actual amount to ask for and that is what we have been doing.”