An ex-LASU graduate who used his girlfriend for money ritual has finally given details how he smashed her head with a pestle before she was dismembered. 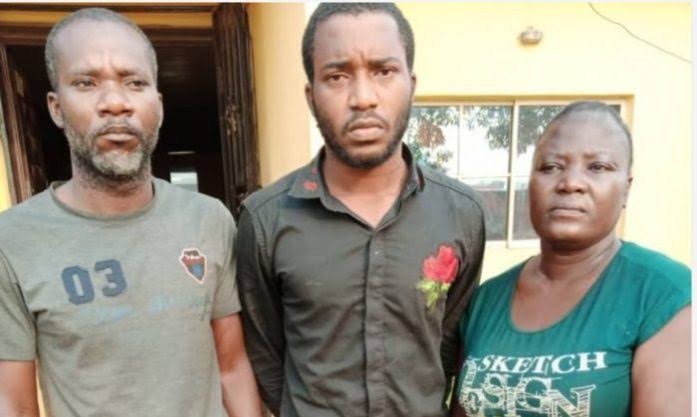 The killers of LASU student used for money ritual
A 22-year-old man, Adeeko Owolabi who alongside one Prophet Segun Phillips, allegedly killed his girlfriend, Miss Favour Daley-Oladele, a final year Theatre Arts student of Lagos State University (LASU), has shared gory details of how he carried out the dastard act.
Adeeko and Phillips as well as his mother, Ruth,  today January 4th, took the police to the shallow grave where Favour's body was buried after she was killed on December 8th. When the body was exhumed, the head, the two breasts, neck and part of the two legs of late Favour had been removed by the suspects.
Speaking to newsmen, Adeeko said he lured the deceased to Ikoyi-Ile where the prophet's church is located and lodged her in a hotel before killing her.
''After I lodged her in a guest house, I took her to a house which I claimed to be my uncle’s house, knowing fully well that the place was a ritualist’s den.  I smashed a pestle on her head and she collapsed. The prophet thereafter used a knife and cutlass to dismember her body which was divided into three parts breasts, head and legs with other vital parts. We buried the remaining part of her body beside Prophet Philip’s Church called ‘Solution Salvation Chapel’, while some vital parts was given to my mother to eat for spiritual cleansing” he said.
Also speaking to newsmen, the prophet who claimed to be the Senior clergyman at Solution Salvation Chapel, said the deceased was murdered to make money rituals for Owolabi. According to him, he used the church as a cover up.
''I am not a prophet but a herbalist who engages in spiritual cleansing for whomsoever come to my place. I used the Solution Salvation Chapel as a cover up not to allow people know the true picture of who I am and what I do. Owolabi came to my place for money rituals and I told him that we need a complete human being for the rituals.
And on December 8, he brought his girlfriend to my church and we killed her and as well dismembered her body part for money rituals'' he said.
On her part, Adeeko's mother, said she was not aware that her son was involved in rituals.
Top Stories